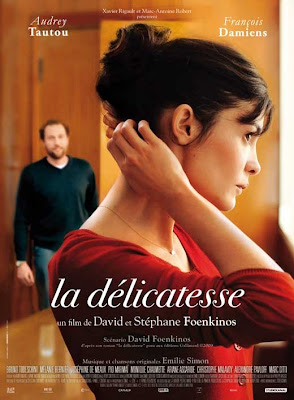 A word of warning this isn't a review this is me gushing....

The closing film of this years Rendezvous with French Cinema is that rare bird a genuinely romantic film that is equally funny.

Let me put it this way, I have it on the short list for one one of my favorite films of the year.

The plot of the film follows a young woman who meets and marries the man of her dreams. When he dies much too early she throws herself into her job...never expecting to crash head long into one of her co-workers.

If the first scene where our heroine meets the love of her life doesn't have you hooked then you're dead.

If the funeral sequence doesn't bring a tear to your eye you're a heartless bastard.

If you don't walk out of the film feeling warm and toasty, don't you dare tell me, because I don't want to hear it.

Yes I loved this movie.

To my eyes and heart this film got everything right. This is a film that was made by people who understand what it means to be in love. The final scene made me want to stand up and scream YES! YES! THATS IT EXACTLY! I resisted but I wanted to.

Some of us in the press screening applauded, which doesn't seem to happen much.

What can I say, it all comes together, the script, the performances and the music just make magic.

And forgive me for not telling you more about the film but I don't want to spoil anything for you.

Go see this film...assuming you can score a stand by ticket because both screenings are sold out. Go... and if nothing else you'll learn how to send your parents home when they bust your chops about not giving them grand kids.

(And if you don't get in, it's my understanding this is getting a regular US release)
Posted by Steve Kopian at March 01, 2012