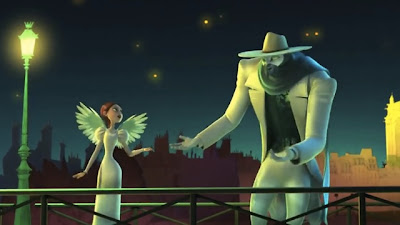 The vibe that felt wobbly last year was gone. The sense of fun was in full force. There was magic in the air.

Standing on line everyone seemed talkative. It helps to break the ice when you carry a Creatures of Delight messenger bag. Everyone seemed ready for a good time.

The line moved fast, and once inside I sat with some people I was talking to on line.

You can tell the audience is old pros since they seemed to be focused on one thing- the t-shirt toss. The kid sitting next to me got one when the shirt sailed over his head and landed neatly on his seat.

There was repeated warning about the 3D glasses at the Directors Guild. The glasses are only good for the system in this theater and are specially made. Each broken pair costs the festival 25 bucks to replace, the film hadn't started and they were already 100 bucks in the hole (last year they were 700 in the red). Truth be told the system here and at Lincoln Center is the best way to see a 3D film.

Before the feature they ran LUMINARIS a short from Argentina. Its an amazing stop motion short about a man who makes light bulbs. I can't explain it more than that without ruining it. Know it's one of the most amazing stop motion films you'll see because it involves animating people with the motion of the sun. Some of it was done artificially, but some of it wasn't. As an animation junkie my mind was blown. I'm thrilled since it's playing with Magic Piano in two weeks because I really want to see it again.

The feature film was The Monster in Paris (in 3D). This is a French computer animated film set during the Great Flood of 1910 when Paris flooded out. 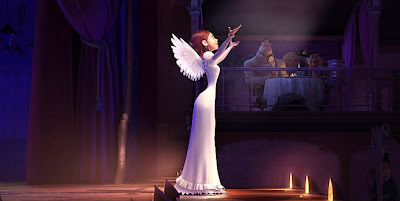 In the midst of the city life goes on. Two friends end up at the lab of a scientist and while fooling around manage to make a flea into a seven foot tall "monster". Oh yea the flea can sing. He hooks up with a cabaret singer and wows audiences, while the police and a city official look for the monster who scared several people before embarking on a singing career.

Between the Beatles films, Ninja Kids!!!, Toys in the Attic and the masterpiece Le Tableau, this is the weakest film that I've seen this year. I know the film has it's fans, I've read miraculous and glowing reviews by some, but for me the film is just okay- except for two pieces.

I'm not going to dwell on the bad, the overly empty streets, the unnaturally dead backgrounds, the clunky story construction, the too many plot threads and the fact most of the characters have nothing to do.

Truth be told the vast majority of the film is one long rambling set up for a stunning action sequence that climaxes the film on a deserted and partially flooded Eiffel Tower. Its a fantastic set piece, one of the best technically in any animated film from say the last five years. The trouble is that because the sequence relies on so many throw away bits from the previous 75 minutes, plus so many characters that have gotten the short end of the stick, the bit is a sequence that I can love on an intellectually level but not emotionally...which in this case makes the film almost worth seeing in a theater.

The best part of the film, indeed one of the best musical sequences I've seen in any movie, and a reason to see the film in a theater, is the song and dance number when our heroine and Francour,the "monster", first perform together on stage. It starts as a clunky rehash to start of an earlier song, but it changes into a Django Reinhart musical fantasia that leaves the stage, sails into Paris back again. I thought it was so beautiful and magical that tears were running down my cheeks. In this one instant the film redeemed itself.

Well, more or less, since by the time the film ended all I could think about were those two sequences which I wanted to see again.

Do I think you'll like it? Maybe. I do have a sense that what bothered me didn't bother many of the kids in the audience. Truth be told if you didn't have tickets, and you wanted to go. If you're not sure, wait for DVD. I will add that on DVD and on cable I would definitely say give the film a shot.

Reservations aside, I had a blast. I know why the film was picked as the opening film, and I know why they added screenings. In all honesty the NYICFF is off to a great start. 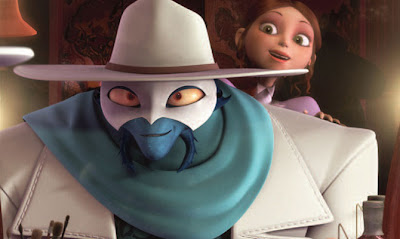