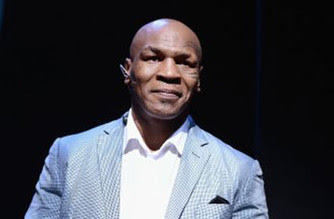 This past Sunday I went with my dad to see Mike Tyson The Undisputed Truth for it's final performance at NYCB Theater at Westbury. We are both Tyson fans and have followed his career from the start. Having heard the show show was pretty could from some friends we got tickets and went
Tyson’s one man show looks at some of the good times in his life and many of the mistakes he made. The show is the course of his life from birth to street kid to World Champion to what one would think is a happier and wiser man. It  is very funny show that reveals Tyson as charming raconteur and natural comedian. It’s the sort of like hanging out with a buddy while he regales you with stories of his past.

Okay, yes I know that technically this isn’t a film,but a version of the show  was filmed when it was on Broadway so it is going to appear at some point on cable. Some day it will be a film just not yet.

Shifting from sad moments to happy, to funny ones and back again, Tyson begins by talking about his mother, of whom he only has a single picture. To him it captures what appears to be one of the few times in her whole life when she was happy. Mike clearly has affection for his mom and his efforts to try to explain her to us makes both her and him very human.

Tyson  then moves on to the question of who really is his dad, is it the man his mom said was, or was it the man on the birth certificate? Mike isn’t sure and and suggests that the uncertainty might explain in part why he was so messed up. From there it's on to the streets of New York and Brooklyn- mentioning his first time on Broadway- the time when he was arrested and thrown in to juvenile hall- specifically Spofford Juvenile Center- which was fortuitous since it was that that sent him on the road to becoming a world championship since it was at Spofford that Tyson started to box. (Bobby Stewart who ran the boxing program when Tyson was there, and to whom Tyson had to plead his case to join it, was in the audience. When Tyson asked him to stand he got a thunderous round of applause)

Mike alternates triumph with tragedy His rise in amateur boxing mixes with the death of his mom. His championships leads into the death of Cus D’Amato who puts him into contact with men who would relieve him of much of his fortune. His marriage to Robin Givens turns sour from the start and leads into a funny story about his meeting with Brad Pitt.

Tyson’s self-deprecating style is utterly charming. He completely understands how he screwed up, but at the same time he is happy just to be here. It knows that the only thing he has left from the mistakes are some truly great stories which he milks at every opportunity. His after-hours meeting with boxer Mitch Green is a comic highlight. Putting on what looks like a mop to play Green, Tyson goes back and forth between himself in sedate Jewish gangster mode and Green's insane angel dust fueled attack and rants.

Equally telling are the stories of his rape conviction where his Don King paid for attorney who turned out to be a legal whiz—in tax matters, The story has a recent kicker because while on tour with the show in San Francisco where he got to meet the prosecutor of his  Gregory Garrison- who was at the show with a large contingent of friends and family. Garrison was surprised that Tyson knew who he was. As Tyson said he was the guy who sent him away for several years so why wouldn’t I remember him? Tyson points out that since Garrison was there with friends and family it would seem to indicate that he feels he was in fact not guilty (Especially in light of the fact Tyson's accuser was later revealed to have done this to several people prior to getting Tyson sent away)

Seeing the show live was a blast since Mike was very much in the moment, interacting with the audience and referencing the now. Tyson genuinely is a wonderful raconteur and it’s clear that he has a place on stage. He's so good that the show has several moments where you fight to stifle laughs because you want to hear what he is saying.

If the show has any real flaw its that the final half hour seems a bit unfocused. Tyson jumps around a bit too much which makes it seem like it was still being worked on despite performances on Broadway and around the country.

I wish the tour wasn’t done since the show is such a good time I want to see it again live- and maybe pay for the meet and greet ticket. 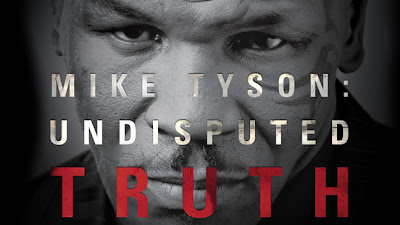 Email ThisBlogThis!Share to TwitterShare to FacebookShare to Pinterest
Labels: mike tyson, not a movie, sports