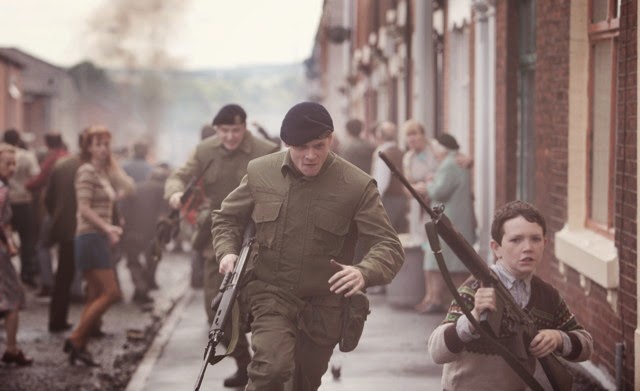 This was one of my must sees at this year's New York Film Festival. When I was making up my list of films I had to see this was on it, so much so that I bought a ticket before I knew I had press credentials because I had to see the film.

I'm happy to report this is a great thriller.

Set in the titled year in Belfast the film follows a British soldier sent with his regiment to the embattled city to try and keep the peace. Things go wrong from the outset as a security detail covering some cops goes wrong from the start, I won't say what happens but the  soldier finds himself alone and on the run from IRA hitmen.

A great looking, great feeling film, this is the closest film I've ever seen that looks and feels like the news reports and documentary footage I've seen of Northern Ireland in the 1970's.  In a weird way this film feels as if it was made in the 70's with the gritty realism that was rampant in the movies.

Ultimately none of that matters much since this is just a great thriller. By the time events set our hero on the run we're locked and loaded and sitting on the edge of our seats wondering if anyone will get out of it alive. The feeling is reinforced when something horrible happens about half way into the film. Its a "whoa" moment that sets the film on its course to the end.

And I apologize for not being specific as to part details, but I really want you to be surprised when you see the film. And you'll want to see the film because it kicks serious ass.

If the film has any flaw it's that the film is a bit too insistent to make sure that we know about all of the games the British government played in Northern Ireland. The film stops to momentarily a couple of times to have discussions that put an exclamation point on what we've already seen and sussed out for ourselves.  Its far from fatal, its more annoying since the film otherwise treats his audience like adults.

Flaws or no this is one of the most enjoyable films at this years NYFF and a must see.

The film plays Saturday and Monday at the Festival and is getting a released from Road Show Attractions later in the fall.
Posted by Steve Kopian at September 25, 2014