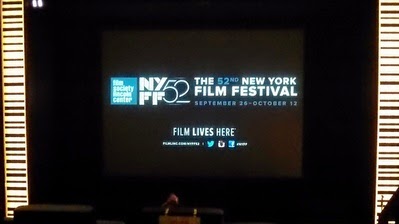 Its finally here, in other words the New York Film Festival starts tomorrow.

While we have been heavily attending the press screenings up to this point that will all change tomorrow as we begin to go heavy into both press and public screenings with ten films over the next four days including Gone Girl, the restored Once Upon a Time in America, the new David Cronenberg and the secret screening. Expect reports from all of them over the next few weeks.

That of course doesn’t include screening reports from Hubert, John, Mondo, Chocko and Mr C who have all have a stack of films to see themselves.

At this point reviews are going to be coming with an increasing frequency. As we see more films at the festival we’ll be throwing things up. I have at least a post a day set until the end of the fest- but that doesn’t include all of the reports from the road which at this point is now a highway, and on the weekends will be super highways. We’re going to have multiple reports from now until mid-October every day.

As for me I’m off to bed because I’ve got two of the big films tomorrow- Whiplash and Gone Girl.
Posted by Steve Kopian at September 25, 2014

Email ThisBlogThis!Share to TwitterShare to FacebookShare to Pinterest
Labels: nyff2014