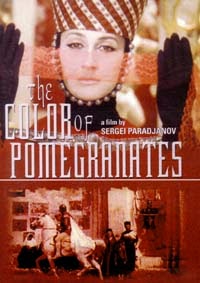 I honestly don’t know what to make of the films of Sergei Parajanov I have several DVDs that Kino put out several years ago and I reviewed Paranjanov:A Requiem the film about him that is on one of the discs but to be perfectly honest outside of Shadows of Forgotten Ancestors I just stare at the screen and go it’s nice.

This year the New York Film Festival is running a restored version of Parajanov‘s The Color of Pomegranates and my attitude is –Good for them.

The story of Color is the story of the poet Syat Nova (the film's original title). Its the story of his life as told via his songs, his history and the directors invention. It's very much like watching a strange performance piece or an living painting.

Don't get me wrongParanjanov is a wonderful filmmaker, he is a true artist and I admire that he was able to get his artistic vision on the big screen, but at the same time his films leave me cold. Watching the films again to write this piece I got through a film and a half and I gave up. His films, which are very Avant-garde are almost too artistic. Often they are static tableaux. I’ve had discussions with fans of his over the years and mostly we end up agreeing to disagree.

I’m not sure if people really like his films or they like the idea of him. I’m serious about that since most of the discussions I’ve had about him tend to talk about his battles with Soviet authorities and his struggle for artistic freedom. I’ve never not had his struggle not come up in a discussion. Are you supporting the man or the art? I'm never sure. I'm equally not sure if people are responding to his films in a positive manner because they so don't get them that they think that the films are beyond them because they don't understand them or have had them explained to them so that they do make sense.

First rule of Unseen Films Fight Club- if you have to explain the film the film fails. films must stand on their own and not have to be explained. If you don't like a film until it's explained to you the film is a failure. Most people do not have their hand held for them or have films explained there for no explanations.

With Paranjanov's films, and Color in particular I've had the film explained to me. Yes it made the film more interesting, but as I said to the person who explained it to me- how the hell was I suppose to know that if I wasn't from Soviet Georgia with a similar set of interests as the director. Its sort of like reading an Alan Moore comic book and not getting it until you read the annotated versions that are out there...Yes Mr Moore your League of Extraordinary Gentleman is wonderful, and yes you are clearly much more clever than the rest of us, but until you tell us how clever you are we're never going to notice it.

But I digress- sort of - Going back and looking at Color and whatever the other film I saw was, it was clear that unless I got out my ouiji board and have the director explain them I was never going to understand his films (except Shadows of Forgotten Ancestors) nor do I think most other people are either.
Posted by Steve Kopian at September 27, 2014