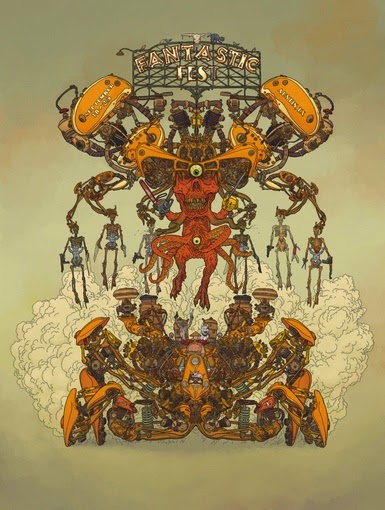 Fantastic Fest starts today and runs for the next week.  I've been told its a great festival and I've considered going but it always conflicts with the New York Film Festival and that's home to me.

Looking over the list of films at Fantastic Fest I realized that we've seen a good number of films. In the hope that we can direct you to some good stuff I've put together a primer of the stuff we've seen. I've linked to anything we've reviewed already and I've given a quick comment for those that the reviews are waiting to post.

Town Called Panic The Christmas Log
Automata- excellent science fiction film about a future where mankind is dying and robots are rising. Its way better than you might think (A review is coming October 6)
Bugsy Malone- classic Alan Parker music with an infectious score from Paul Williams. I can't say enough good about.
Death Wish 3- Charles Bronson kicks ass. What more do you need to know?
Force Majeure - What happens in a family in the aftermath of an avalanche. A great family drama (A review is coming right before it's theatrical release)
Horns- Daniel Radcliffe is a man accused of murder who grows horns. A great adult fable/thriller (A review will appear before it's Halloween release)
In Order of Disappearance
KungFu Elliot
Man from Reno
Man in the Orange Jacket
Ninja 3: The Domination- crazy horror martial arts mix as a young woman is possessed by a dead ninja. Get popcorn
No Man's Land
Pandas
Tusk
Unicorn Blood
Voice Thief
Whispers Behind the Walls

For details and tickets go here.
Posted by Steve Kopian at September 18, 2014