On Further Review: Boyhood (2014) is good but not great (revised) 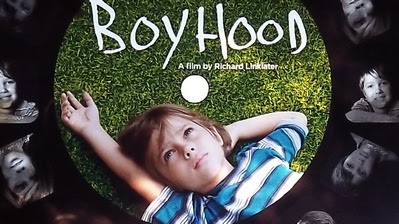 (Warning- I do reference the end of the film below)

Would everyone calling Boyhood one of the greatest films ever made please come in and get off the ledge. And while you're at power down your speakers and hype machines, it's good but not that good.

Don't get me wrong the film is good. Actually it get better as it goes on, but any talk of best of anything needs to be taken with a serious grain of salt.

Everyone is is going gaga over the way it was filmed, with some seeing it as a new possibility in filmmaking, while others feel it's a once in a life time sort of thing. Its neither, there have been other films that have done it, Michael Apted 7 Up series has done it on the documentary side and there have been a few  short term fiction efforts to film in real time. Its not groundbreaking in anyway except in the amount of time it took to get done. Its a nice thing, but in all honesty it's something that is being over sold.

What amazes me is that many people I know are amazed at how the story hangs together over the course of the film. Many truly intelligent people wonder how could Linklater know where to take the film? I would think by working from a sketch of a plot and then writing the scenes based on where things were when they filmed. People are amazed at what the film references, but for me that's obvious, it's simply referencing the now in a long term project. If you shoot in chronological order it's easy to change the current bit to fit what happened in the past. Its not magic.

I think the reason that the film is thrilling so many is not for anything the film does in actuality, but sort of what it represents and what it reflects. The film reflects what we bring to it. I've heard people talking about how moments of their lives. This moment or that moment reflects something nostalgic for them and as a result the film seems to be something great. Admittedly any good film does that, but Boyhood does it without really having much to say on it's own. Any of the deep meaning are things we are bending from our own experience in order to show how Boyhood reflects that. How does it do it? Simple it only gives us details for brief moments of the characters lives. There is just enough there that it seems real, but not enough to set most of the story in stone. The film isn't a so much a storybook so much as story hooks that we can string all our lives, hopes, and dreams on. I'm pretty sure that what people are reacting to is not the films hooks but how we ourselves connect them up.

For me, when I look at  the film as its own thing Boyhood has nothing deep going on in it's head except to say this is life.There is nothing happening beyond that, which is fine, but it isn't particularly meaningful. If you want to defend the film on a "this is life" platform that's fine, and accept that the film is great because of what we are adding into it  then I can't really argue with you.  but at the same time, you have to realize that the film has some real problems as a drama.

Lets start by saying the performances are uneven.admittedly until Ellar Coltrane playing Mason gets a few years on he's awkward. Its completely understandable, he's not an actor. Lorelei Linklater as his sister is marginally better but she's saddled with a non-character. She has one or two character traits and she never changes over the course of 12 years. So much so that while Coltrane improves over the course of the film Linklater seems to get worse. It doesn't help that her character is pretty much just an annoying self centered kid.

Actually Mason doesn't have much to do either, he's largely the brooding outsider who is way too intelligent and driven by his own passions. Its just looks and stares most of the time which is great for the director since it allows the audience to give him anything he never says or expresses.He is us, the audience carefully taking in all that he sees.

I ‘m bothered by the sameness of the events and the lack of wonder in Mason’s life. the film should be called Family-hood since the film is focused largely on Mason and his family. Where is Mason going out with his friends? Its there in flashes but largely everything we see is connected to Mason interacting with his family. We don’t really see him hanging out with friends until the later part of the film when Mason goes out and hangs out at parties. Where is Mason being a boy with his friends? Where is Mason going out and just having a good day with friends? Its not here. The film is a carefully crafted series of days- all of which coincide with a move, a fatherly visit, his mother getting abused or some event that allows for drama.

What struck me is there is no moments of great joy. There are no scenes where Mason is having fun other than playing video games or hanging with his dad, or drinking. There is more to being a boy and growing up then what we see. There is more to life than what we see in these similar days. As someone in my office said to me Mason’s life is so dark and dull in some ways it’s a wonder he didn’t kill himself (this coming from someone who loves the film). I would have thought there was one moment, somewhere, before the final sunset, that had some magical property for Mason. I mean aren’t there magical days for kids?(even if their Dad's are kill joys and says there is no magic)

I’m trying to tease out what this film says about modern life in America, are our lives Are our lives this boring? Apparently.

While I understand why Ethan Hawke and Patricia Arquette were in the film (to help secure financing) their presence detracts from the rest of the film. There are no stars in this film, until either one of them appears and devours the light. The film should be about people and not personality and they deflect attention from the people.

I hate that every one of Arquette's husbands/boyfriends are abusive drunks. And it's not so much that they are abuse drunks, I mean people tend to make repeated mistakes with mates, but all of them seem to be exactly the same. There is no shading, their is no coloring there is nothing except a feeling that anyone other than Ethan Hawke is a jerk.

I'm still trying to make sense of the film's multiple endings. The film could have ended when Mason graduates, A better ending could have been when he went to the concert with his dad. How about the moment he leaves for college- which is really end of boyhood. No the film goes on to Mason going to College and then going off with his roommate and the girls as they go wandering in the desert-I could accept ending it when they leave to go to the desert-the official start of the next phase, but no we get them wandering around for a bit before they sit and watch a sunset...no. No. No. Maybe if the scene had said something, but it just sort of hangs there.

(An aside- did we really need the bit with the restaurant manager? Its way too neat in away nothing else in the film is)

When the film finally ended I was like "okay". Then got up and walked out pondering if there were two versions of the film since this was so different than any film that anyone was telling me about.

Don't get me wrong, its not a bad film, but where is this ground breaking film?

Normally I can see something in a highly praised film, but this film, other than it's long gestation period is so incredibly run of the mill and unremarkable as to completely boggle my mind. Is it that the critics think the long period of filming adds weight? It doesn't. Frankly the long filming period is a trick, its a Macguffin that makes the film seem more than it is. I would be hard pressed to think that were you to film the story in a normal period of shooting the film would have made a film that no one paid attention to.

Give the film five years and I'm guessing attitudes towards it will have changed.

For me Boyhood is a good film, but it's no classic. I think that if you look at it with a true critical eye for what it is and not for the mirror or hooks you're using to reflect your own thoughts on, you'll see that I'm right.

Its a good film

Its just not a great one.
Posted by Steve Kopian at September 06, 2014