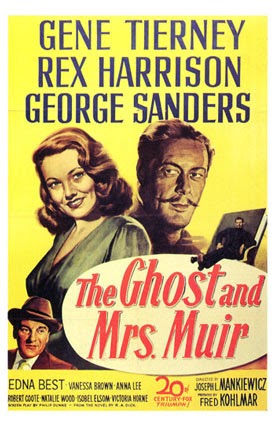 The original film version of The Ghost and Mrs Muir is not the TV show that I used to watch regularly in reruns as a kid growing up. Less sitcom and instead more dramatic romance the film stars Rex Harrison as the ghost and Jean Tierney as Mrs Muir. Its moving little film that rightly holds a place in many people’s hearts.

The plot of the film has Mrs Muir moving into Gull Cottage with her daughter. The house is haunted by Captain Gregg. At first Gregg wants the house to return to the quiet of years past, however there is something about Mrs Muir that stirs him and they become friends. Eventually knowing that Mrs Muir could use some money he dictates his memoirs to her, however this brings Muir into contact with a seemingly nice manwho may or may not have Mrs Muir’s interests at heart.

I really like the film and while I have it on DVD, I don’t really watch it all that much of my own choice, instead preferring to catch it whenever I come across it on TV. There is something about seeing this film late at night that makes me feel warm and fuzzy.

An old fashion romance of the sort they really don’t do any more the Ghost and Mrs Muir is the perfect film for those looking for a great romance to curl up on the couch. However since the film is playing at the New York Film Festival, it’s the perfect film to see on a big screen if you want to get away from all of today’s troubles. Filled with a sense of nostalgia event’s own day (the film is set in 1900) this really is a trip back in time to a quieter and simpler place.
Posted by Steve Kopian at September 29, 2014