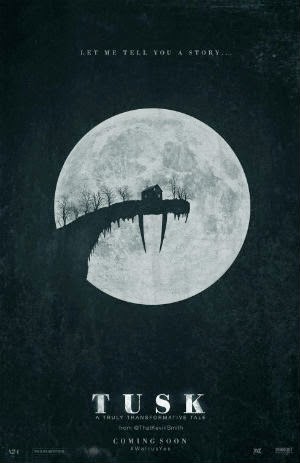 Okay- before I start let me just say if you don't want to know anything about the plot or the big star in makeup then let me give you a capsule review:

Tusk would be one of the best horror films from the last five years if only Kevin Smith had either eliminated the humor or blended it. As it now stands its a film that doesn't know if it's funny or scary.

Okay-now that that is over let me say from the point on I'm going to spill the beans, so if you don't want to know stop reading- if you do want to know keep reading....

The plot of Tusk has Wallace(Justin Long), the obnoxious shock jock host of the Not See Party podcast going to Canada to interview a guy named The Kill Bill Kid because he chopped off his own leg with a katana. Arriving at the kids funeral he realizes he’s out of luck. Wanting to go home but desperate for a tory he lucks into a flier in a men’s room offering a room for rent and plenty of stories in a far off town. Wallace jumps at the chance and drives off into the Canadian night to find the man with the stories. Arriving at the home of Howard Howe (Michael Parks) Wallace is soon spellbound by the man’s stories; that is until the Mickey Finn in the tea kicks in and he’s face down on the floor. When he wakes up, groggy and missing a leg. Wallace instantly realizes he’s in deep shit and that something dark is afoot. Eventually Wallace manages to call his friends and they head off to Canada in the hope of finding a rescue.

A wildly uneven mix of horror and comedy Kevin Smith has made a film that should have been one of the best horror films of the last five or ten years but his inability, or unwillingness, to blend the humor and the horror makes for jarring experience. The sad thing is that the jokes are largely funny, but on such radically differing plain as the horror that it’s almost as if you’re watching two different films mashed together.

I think the problem with the humor and horror not blending comes from the fact that the horror is from the hand of a mature assured master of cinema while much of the comedy is from a drunken frat boy lowest. While this is in keeping with Long’s dickhead lead character the film really should have toned it down once Wallace gets into trouble, instead it adds in a bumbling detective, which pushes the film into Pink Panther territory.

I do have to say that the Wallace character is too loud and too obnoxious to really care about. Yea, we feel for his plight, but the cruelty of of his jokes, treatment of his girlfriend and piss poor attitude takes the edge off our feeling for him once the bad stuff starts to happen. He kind of deserves what he’s getting, no matter how horrible it is. What makes it worse I have the feeling that Smith turns up the volume when Wallace is talking making him even more overbearing. It also doesn't  help that he is so badly written compared to anyone else. He genuinely speaks like drunken frat boy with his mind in the sewer and an inability to stop talking even when other people are talking.

I like some of the humor and I think that if Smith wanted to turn Johnnie Depp’s bumbling detective into a new Pink Pather, I’m all for it, just so long as he makes comedies and not horror films.

As to the horror-

Despite what Kevin Smith may or may not have said Tusk is an uncredited remake of the film Ssssss from the 1970’s. While there are variations, it’s structure is exactly that of the earlier film with Strother Martin and Dirk Benedict as house keeper and boarder. In that film we have crazy doctor Martin taking his assistant and turning him into a cobra. If it’s not  a conscious remake, it at the very least has unconscious steals with the animal rescues/side show being the most glaring.

Beginning with the appearance of a truly great villain in Michael Parks’ Howard Howe Smith has crafted a slowly building horror film. Park’s performance is key to everything and if he wasn’t as good as he is the film would never have worked. Parks raconteur Howe sucks us in with his erudite musings, quotations and tales of the sea. He’s so charming that we almost want to trade places with Wallace to hear more of his stories. He is the definition of delicious evil to the point where it’s both shocking and not when he gets off his motorized scooter and smacks Wallace at dinner. We knew it was coming, and yet are shocked by it.

Equally shocking is what Howe does to Wallace. While we never full see what Howe does to Wallace to turn him into a walrus, the little bits coupled with the anatomical drawing is enough. Equally horrifying is the suit he’s fit into, which is a nightmarish mess of flesh and skin from other people, including faces. I just don’t want to know, more so after wee an earlier failed attempt at the bottom of the pool.

There is a darkly damaged psychology running rampant through all of the scenes and had we been forced to stay there either watching Wallace trying to deal with his new body or with Howe and his disturbed world view, we would have staggered out into the day light and wandered into traffic because its so horribly abnormal. I would like to think the jokes are the result of director Smith not wanting to dwell in that complete darkness lest it devour his soul. Personally I wish he would have stayed since there seem to be some truly dark wonders living there.

The Fleetwood Mac song which is heard in an instrumental riff when Wallace arrives at Howe’s house and in its full glory during the final confrontations is used to creepy effect. I will not be able to hear the song ever again without seeing the climatic images from the film in my head.

If you take the horror sequences on their own Smith has created a masterpiece and quite probably his best film. These sequences show a maturity and and command of cinema that was lacking in most of his output. The horror sequences are things that are just gloriously constructed and I want to see them again just to watch the craft. This is a beautifully made horror film.

I love the horror of this film. I just wish it wasn’t wrecked by the clash with the humor.

Reservations aside this is a must see for anyone who likes great horror and who can put up with some annoying humor. 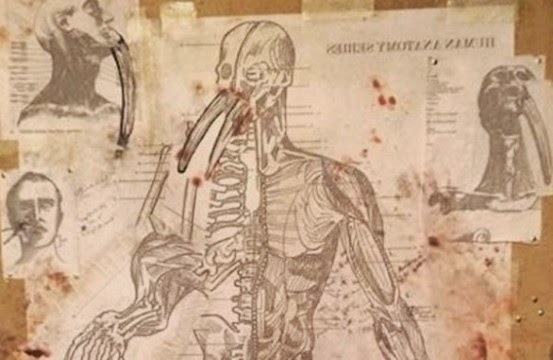