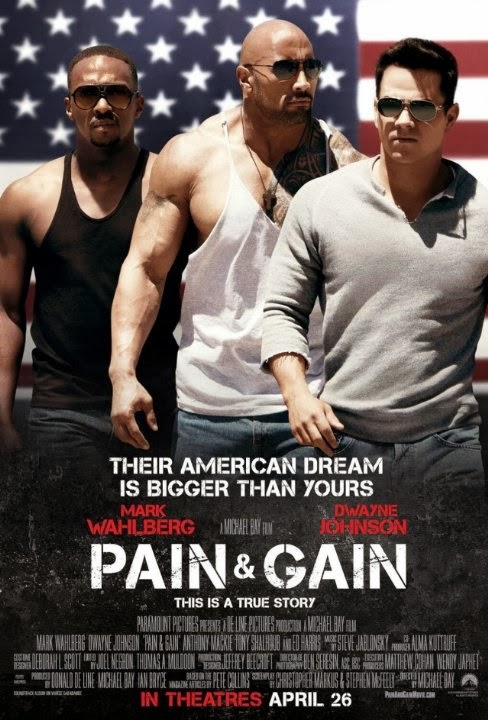 Michael Bay can’t win. After years of churning out Transformer movies he goes off the board with a small film(at least compared to the Transformer films) and he gets beaten up for it. I’m not sure if it’s a hate on for the director or because they didn’t know what to make of the film which shifts gears and mixes genres with frightening regularity. For whatever the reason critics hate Pain and Gain, they are absolutely over reacting to the film, which is, in its own way actually pretty good.

Nominally a true story, the tale of some not too bright guys working in a gym who decide to kidnap one of their clients has the makings of either a very black comedy or a very dark film noir. These guys never seemed to really grasp the complications of what they were doing. As they take the guys money they realize that there is no way they can let him live and they make plans to kill him, however things play out their efforts to kill their victim go wrong and he remains steadfastly alive. As bodies pile up it becomes a ghoulish comedy of errors.

It took me two tries to get through Pain and Gain. The first time through I didn’t seem to know what the heck I was watching. The second time through I clicked with it and it’s off the wall vibe. Yes its dark and funny and twisted and wrong and stupid which is the nature of the story. These are not bright guys doing things that kind of defy logic and reasoning. In preparing this piece I went back and read on the real story, in some ways it’s even more loopy than the movie.

I like Pain and Gain. I like that its completely off in it’s own universe. I like that it bends genres and that not everyone gets it. While I freely admit that it isn’t a great movie, it is a good one, which in this case really is enough.
Posted by Steve Kopian at September 12, 2014