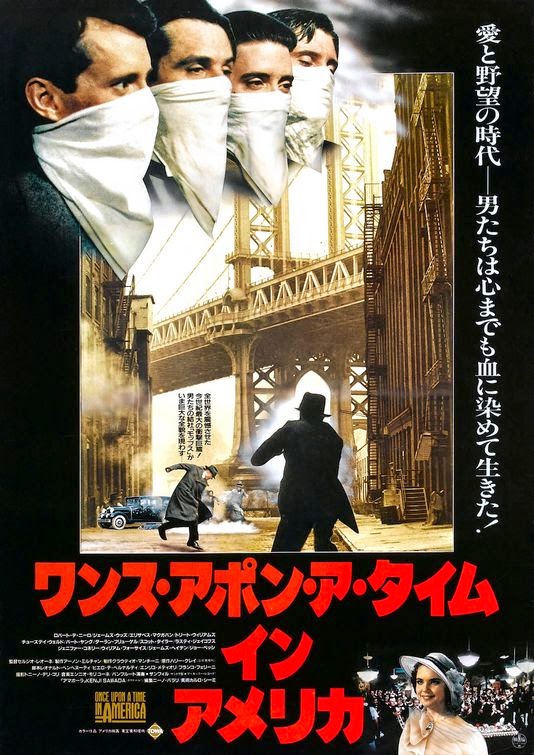 Every year the New York Film Festival unveils some big epic restoration. In the past its been Ben Hur, Lawrence of Arabia and this year its Sergio Leone’s Once Upon A Time in America.

Leone’s final film is an epic gangster tale set in New York. The original plan was to make an epic film running over six hours (he had by some accounts as much as 10 hours of material). The producers balked at a film running so long, so Leone suggested that he cut the film into two three hour parts. The producers balked again since Bernardo Bertolluci’s 1900 had bombed when it was released in exactly the same manner. Leone then cut it down to just under four hours and hoped one day to get his full version seen.

Of course Leone didn’t count on Hollywood freaking out at his time shifting memory structure and demanding it be completely recut to just over two hours and put into chronological order (they also wanted material cut that would garner the film an NC17/X rating). The short version bombed because as those of us who saw it will tell you it was a mess. Too much was cut out and even allowing for the removal of 90 minutes the chronological structure creates all sorts of problems because it begs you to know about events that were not required by the original memory play structure.

Thankfully the short version is a memory and with the advent of home video the “full” version was the one everyone sees today—or until the appearance of the new five hour plus restoration which gets us closer to Leone’s intended version.

The film follows Robert DeNiro’s Noodles who is long on the run. Sparked by a letter saying that the cemetery where his friends are buried is to be sold off and that the bodies will have to be moved, he begins to flash back to earlier days, the days when he was growing up and coming up through the ranks of organized crime. The letter has also frightened him since it indicates that someone know who he really is.

A wonderfully dense crime drama this is exactly the sort of film that you could only get from Europe. It’s a film that you have to give yourself over to as it tells a decade spanning story about friendship, loyalty and honor. I can’t say enough good about the film and in the four hour version it is one of the truly great crime films ever made, even if the film can occasionally be a bumpy ride. If you’ve never seen it you should.

As I write this piece some seven weeks before the restored version of the film’s screening at the New York Film Festival, I haven’t seen what goodies that version contains, however on the basis of the cuts I have seen I would consider this new version one of the must see films of the festival. Yes I know the film is coming out on home video days after the screening but Leone’ s film needs to be seen big. While I only saw the short version on the big screen the visuals of the film have haunted me ever since. I can’t tell you how many times I’ve wished I could have seen the whole thing on the big screen- and while I have had a couple of opportunities over the last 30 years the scheduling of the screenings always worked against me. This time I’m going to make it to the Walter Reade and see the film on the big screen.

Seriously if you’ve never seen it you have to go. And if you’ve only seen it on TV it’s also a must. This is one of the truly great films you’ll ever see. And while they supposedly they are working on a cut that will potentially bring the film closer to the full six hour running time, you shouldn’t wait- you should just jump and see this film on a big screen while you can.

(Look for a report from the screening after it plays Saturday )
Posted by Steve Kopian at September 25, 2014