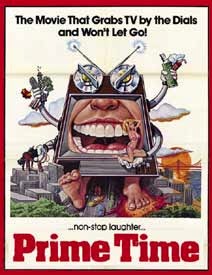 Closer to Tunnelvision than Groove Tube or Kentucky Fried Movie, in that it has a connecting plot this movie is pretty much 75 minutes of good TV show and commercial spoofs. The central plot has the President of the United States attempting to find out who is behind the decidedly un-family friendly shows that are playing on TVs across America.

For the most part the movie is full of very funny low brow and topical humor. Some of the topical stuff, the Biafra TV dinner for example, will mean nothing to those who weren't around in 1977 when this was made. If you were around then you'll probably find this very funny. Of course some of the jokes are topical once more with a tobacco ad spoof taking aim at organizations like Save the Children. Much of the humor is very pointed and it would probably be a good guess that it helped keep this from ever being widely released (of course the glut of movies like this didn't help either) If you can find this movie its worth taking 75 minutes to give it a shot (though look for it under the name Prime Time). Odds are you won't remember it in the morning but you will get some laughs out of it.

(Probably of interest to no one: The DVD I saw appears to have been made from an unmasked print which frequently allows lights, microphones and other goodies to be seen on the edges of the screen.)
Posted by Steve Kopian at September 03, 2014