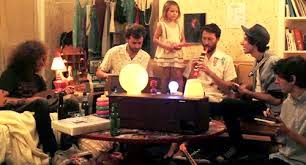 Lilias, the daughter of a well to do French painter runs out on her boyfriend and crashes in the home of a couple, Mary and Leeward, and their young daughter, Rainbow. Leeward fancies himself a musical artist but his wife, a nurse has other ideas. Things begin to crack thanks to intrusion of Lilias forcing everyone to look at the balance between reality and their dreams.

Rock solid, if a tad quirky look at the tightrope walked by free spirits and artists in the world. The film examines the perilous path that those who create and are driven by their passions walk and the difficulty faced by those who not only love them but also wish they would get a grip on reality. Its a struggle I wrestled with for years, that family members I know are still struggling with as are many friends. At what point do we continue to chase and at what point do we chuck it all?

I don't have an answer.

A good film with some good performances, some nice songs and a real sense of the struggle Swim Little Fish Swim is one of those small scale gems that Unseen was set up to highlight. Its a small film, that despite several appearances at festivals and in theaters around the world is very much in the danger of not finding it's audience. I say this because I mentioned to several people I saw this and they seemed to think it was going to be a quirky inde comedy. It's not, its something deeper, richer and daring enough to end it in such away that you'll be talking about it over drinks afterward.

Seriously this is one to track down, especially if you're sick to death of big budgeted Hollywood crap.

The film opens Friday, September 19 in New York City (Cinema Village) and on VOD (iTunes, Google Play, Amazon Instant Video & VUDU). The film will then roll out in several cities in the weeks that follow.

Do yourself a favor and mark it on you calendars or must see lists.
Posted by Steve Kopian at September 17, 2014