Director Terry Gilliam and actor Lucas Hedges sat down with 11 members of the press to talk about Zero Theorem, life and film making yesterday afternoon. 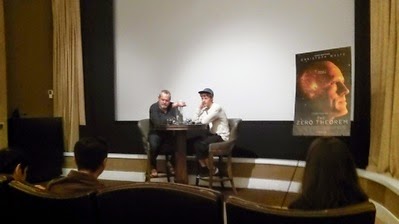 The whole thing ran about 35 minutes and was one of the best press conferences I've attended. I have to applaud the people who put it together since they got the right people in the room to ask the right questions.There was no ass kissing just great questions and answers. 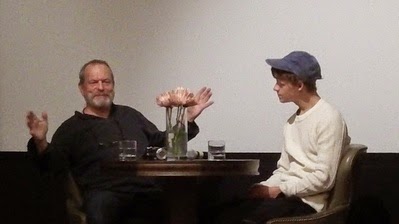 The topics included not only the film but filmmaking, Don Quixote (which he said is "fluid" again after an email two days ago), the world, dinner with Chistoph Waltz, Romanian moonshine and some other things I can't remember.(I'm putting this post together late at night and I'm beat). Actually the really cool thing is that Lucas Hedges is quite the raconteur himself and has a great simpatico with Gilliam to the point I would love to see Hedges interview Gilliam. 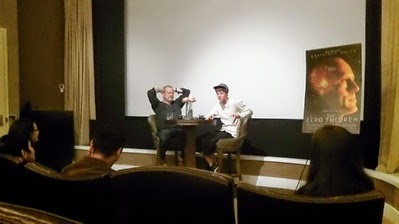 I know I should give you more details, and I will, just as soon as I decide whether or not to transcribe the conference or whether to just post the audio since the sound quality isn't bad. Until then I wanted to post some pictures to prove that Gilliam really does exist. 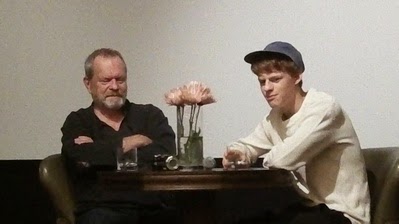 Lastly I want to say that despite prepping for an interview for the two months since I saw Zero Theorem I didn't ask any questions. Not because I didn't have them, rather I had prepped hoping for a long conversation with Gilliam about the philosophy of the film and himself and I would have needed time to have a discussion not ask a question or two. (Mr Gillam, if you see this and want to do an interview like that please feel free to contact me,) 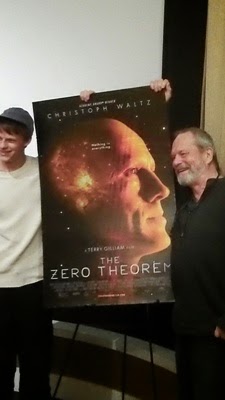 And with that I leave you until I can find sometime to sort out the audio, which, as I said is really good.
Posted by Steve Kopian at September 19, 2014