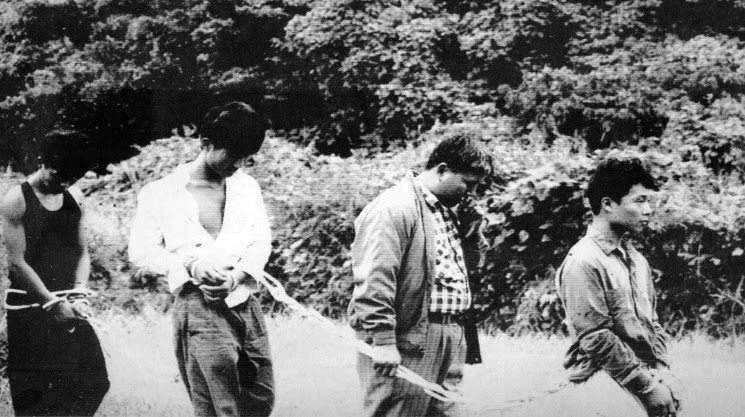 You know why I think Non-Fiction Diary is one of the best films at the New York Film Festival and very probably the year? Simply because twenty minutes in I knew I had to see it again. The film was telling me too much, it was explaining more than I could handle and the farther I was going into the film the more I wanted to go back so that I could see how what I was learning was affected what went before.

It’s a film that is very much alive and I loved it.

Non-Fiction Diary nominally tells the story of South Korea from the economic boom that surrounded the 1988 Olympics onward focusing on the Jijon Clan case which involved a group of poor young men who came up with the idea that they could kill their way to having a fortune. Their motivation was in large part political, they felt marginalized by society and wanted to get back at “the haves”. The problem was that they weren’t taking out the rich but people marginally better off than themselves. However the film doesn’t just deal with the Jijon case, it casts its net wider looking at the whole of Korean society taking in, amongst other things, the corruption that lead to a bridge collapse that killed dozens, the negligence that resulted in a mall collapse and the societal attitudes that lead to massacres during the Korean War and other inequalities in Korean society that allowed people who killed more to get away with a slap on the wrist.  And there's more, much much more there was so much that I could only take in so much during my one viewing of the film.

I love this film a great deal. Actually I would be hard pressed not to say that it's one of the best films of 2014.

Even now, several weeks after I saw it It has my head spinning. I've been pushing this film as one of the must sees for this years New York Film Festival to anyone who'd listen and quite a few who wouldn't

Sitting down to write this piece I looked at my copious notes and realized that there was no way I could use them. I had essentially written out a long synopsis of the film, listing details and events it covered. Looking at it I realized that I could tell you about it all, which would almost defeat the purpose of you going to the film- I mean you need to hear the stories for yourself like how the cops almost didn't go after the bad guys not so much because the victim who showed up on their doorstep spun too fantastic a tale, but rather because it was just before a holiday and the traffic was going to be bad. Of course  more that will make you stare in disbelief at how things happened in South Korea, but you have to hear this stuff for yourself.

On the other hand I think it would be better if I just said you need to see this because it will cause you to stare at the screen, ponder existence and wonder a great deal about the human race. Is this what happens when a country strives to become modern?

This film is a mind blower and one of the best films of this year.

I can't wait to see it again.

The film plays Tuesday and Wednesday and is a must see. For tickets go to the film's festival page..
Posted by Steve Kopian at September 26, 2014