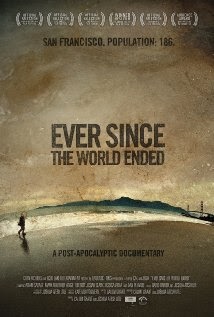 "Documentary" about the last people left in San Francisco after a plague has wiped out almost all of the population of the world.

Good but very imperfect little film that works best when it has the people talking about what it was like during the bad old days as well as how they are getting along. In the small human moments the film shines and you feel as though the world has indeed ended.

The problem is that the film wobbles outside of that, the city is too clean, it runs counter to what the people are saying. The film also wobbles when the film drifts out of the city. While I like the idea of seeing whats outside the city, there is something about those sections that just doesn't work.

If you can get a chance to see the film and are intrigued by the idea about what happens after, I'd give it a shot, though I'd try to pay no more than a rental. (I should mention that Mythbuster Adam Savage plays one of the survivors who is very much like he is on the show.)
Posted by Steve Kopian at September 08, 2014