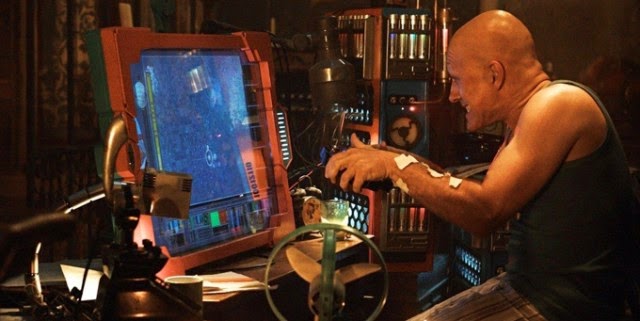 The latest film from Terry Gilliam is a mess. Its a film with a fair start, a great middle and a WTF "you didn't know how to end this ending".

The film is the story of  Qohen Leth (Christoph Waltz) a computer programmer working for Mancorp a huge corporation that is into everything. Leth is a weird collection of ticks and thought patterns who hates to be out among people. He wants desperately to work from home since he is expecting a call that will tell him the meaning of his life. Eventually his wish is granted when he is assigned to come up with the Zero Theorem which will prove that life has no meaning...

I love roughly 90% of this film. I could argue that in many ways it's Terry Gilliam's best film. the trouble is the beginning and the ending.

The problem with the film is that it plays like Gilliam trying to ape a Gilliam movie. Its weird and strange and completely out there. Watching the early part of the film I stopped watching the film and just listened to the dialog. What can I say it's a brilliant script and had Gilliam not amped everything up to silliness the film would without a doubt played even better.

Additionally certain touches, say some of the nonsense at the party with the tablets and pretend smoking are going to date the film almost instantly. Once you get away from that, the cyberpunk or steam punk-esqueness of the designs makes it timeless.

The other problem with the film is the end, where did it come from? No really where did it come from? From the point of the illness onward the film feels less organic and more controlled as if on some level they knew where they wanted to go but didn't know how to get there. Actually what it feels like is they are thrashing about unsure of how to end it. In the process the film throws away the allegory which had been working nicely, creates a confrontation that to my mind makes no sense and ends with a replay of bits of Brazil. It doesn't work at all, if for no other reason than it throws away the previous 100 minutes of the film.

Thankfully the film has those 100 minutes during which the film is wonderfully alive with characters and ideas. I loved the long middle section to death and I was frequently moved to laugh, smile and cry by a script that makes you really ponder life and it's meaning.

As the credits rolled I just shook my head and thought of a paraphrase of a line from Casablanca "At least we'll always have the stuff before it went off the rails". To me that's enough.

Despite the flaws I think this is a must see. There is an Oscar worthy performance from Waltz and more ideas then ten major American films this year.

(Look for a report on a press conference with Terry Gilliam some time after Thursday)
Posted by Steve Kopian at September 16, 2014