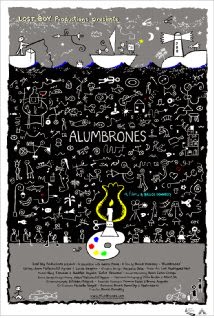 Alumbrones is one of those movies that is going make you wish it was twice as long as it is. Filled with great people, great art, great music and a bouncy wonderful sense of life this is a glorious portrait of the artistic community in Cuba and how they are struggling to survive. It’s a film that makes you feel good.

The film follows a large number of artists as they go about their lives trying to create and get by in a country that was hit hard when the Berlin Wall fell and the the Soviet Union stopped being communist. The Soviet Union was  responsible for keeping Cuba economically viable and when that was lost the country changed. Artists had to scramble.

Fortunately the artists over came the restrictions and they continued to make some truly wonderful and breath taking art. What the artists are turning out is something special and for me it was a wonderful thing to get to see not only the art but also to see how much of it comes together.  I love to watch how art is created especially when we get to have the creators talk about what they are doing and why, for me that adds so much to any piece of art, especially really cool art as much of this is. Equally cool is that the artists don't come off as above it all, their answers don't seem to be by rote. I've talked to a good number of artists over the years and some seem distant here everyone is engaged and wants very much to talk about their life and art and it creates something truly magical.

The problem for me is that it’s much too short at 75 minutes (70 minutes if you ignore the end credits). There is simply too many people and too much to cover in that brief period. Yes, I know the focus is more on the artistic community as a whole and not so much on the members of themselves, but at the same time when you have such wonderful characters such as these it would have been nice to spend a little bit more time with them. (And I would give you their names but I don’t remember who was who, the only real technical flaw in the film is that until the end credits come we really don’t know anyone’s name.)

Ultimately it’s a minor flaw. It’s nitpicking kind of like having the most delicious of candies and then getting pissed it wasn’t a multi-course meal. I’m bitching because I want to indulge in more of it.

You have to understand I’m a sucker for films that show creation. I love to watch art being done. I love to see how it all comes together. I love to hear how and why artists create and this film is full of that.

This is a great film. If you get a chance go see it.