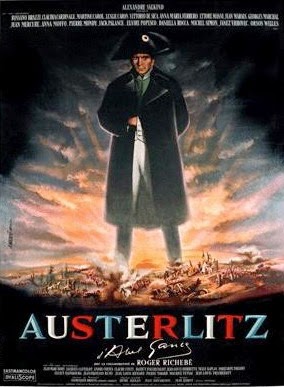 Thirty five years after his legendary silent epic Napoleon Abel Gance returned to the subject of the life of Bonaparte with (The Battle of) Austerlitz, an epic all-star telling of events leading up his greatest victory. It’s a huge film of the sort that the world cinema turned out with regularity in the late fifties and sixties in order to compete with TV that plays very differently than Gance’s work some thirty years earlier.

Full confession, I saw this as an English dubbed pan and scan film on DVD from Sinister Cinema. To the best of my knowledge this is the only way to see it short of getting an import version from France. I know it slightly impacted my opinion of the film since I didn’t see the epic scale of the battle scenes, but I don’t think it was fatal.

To be honest it’s huge bloated and the sort of thing that they don’t do any more for good reason, namely it’s huge and bloated and the epic scale gets in the way. You know it’s not going to be great when about thirty actors and actresses are listed above the title of the film. Why are there that many people? Because even a lot of the walk on roles have a big star in them. I’m guessing that if you swung a cat around the set you would have knocked over half the actors in Europe.

For me this was more a trip down memory lane than the experience of watching a great movie. This is the sort of film I used to watch on rainy Sundays or more often at two in the morning. There is a good chance I would have seen this on the black and white TV that was in my room late one night when I couldn’t sleep. Seeing it takes me back to a place and time when I felt safe in my parents’ house.

The film itself is okay. It’s a weirdly static film where characters seem to be standing in tableaux rather than in real rooms. It all feels staged which is something that Gance’s earlier films never did. I’m guessing that this is the result of the budget only allowing so much of a set. What’s worse is that with so many actors in it that many scenes are killed by the desire to play spot the famous face. Its not bad, but it’s far from great even if it was made by a once great filmmaker… and the only reason I’m writing the film up is because it’s a Gance film and it continues his earlier classic film (This would have been the 3rd of 6 films if he had made all the films he intended).

Worth a look for those interested in the work of the director or one of the stars, all others need not bother lest it be a rainy afternoon with nothing else on.
Posted by Steve Kopian at September 10, 2014