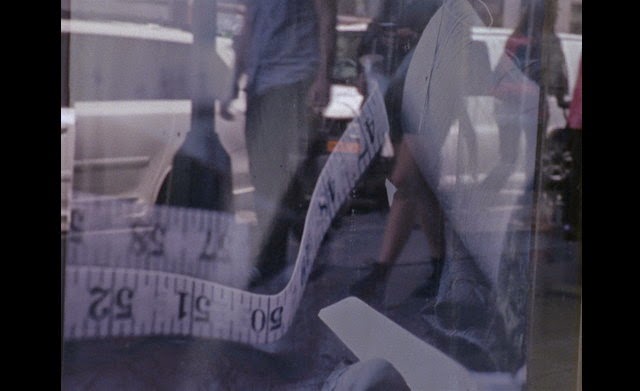 The View from the Avant Garde section of the New York Film Festival has become Projections. Its basically the same thing with a slightly wider latitude, there are several feature documentaries that could run in the documentary section or the Main Slate with no trouble.

Whatever you call the section the series is always full of short films, many times collected by a director or a subject. The Festival usually screens a section or two for the press giving us a sense of how things will run. This year the festival ran 8 shorts from 7 collections in 2 groups. This was a good thing and a bad thing. Its good because it allowed us to see a wide variety of the types of films screening but it's bad because the differing nature of the films was very jarring and worked against one film in particular.

I'm going to give you some thoughts on all the films we saw and leave it to you to see if you want to see more or not.

PAN
This will actually be the last film screened in the series. Its a silent film that starts as black and white shots of church somewhere. The camera moves, pans. Thereis a shift and suddenly we're watching the film projected on a screen. The camera moves and dances and becomes color.  I thought it was unremarkable.

Razzle Dazzle
Rapidly cut together shots of material up close so we can see the texture. I know several writers came to see this five minutes film specifically. Personally I could have stayed in bed.

Things
Divided into five parts (four seasons and another section I didn't catch) this is a collection of found footage, pictures and sound bites. Its interesting in bits and pieces, like the part where the squirrel gets pissed off at a fake one of its kind and attacks it. Its a kind of one stop history of Avant Garde film history.

Measure
Probably the best of the 8 films screened this is a history of the two men who in the 1790's did the measurements that became the Metric System. What's interesting here is that it was made by two directors in a manner that mirrored the the seven year struggle of their subjects.

A wonderful little film that suffered by being shown with the above three films with which it shares nothing in common. The result of this was that after the screening several people in the audience remarked that they were halfway into the film before they connected with it since they were expecting something similar to the first three films screened.

I expect this film to have a long life after the festival.

Innocents
A man shows us numerous photos with holes in them. We watch a man with a white plastic bag over his head talk about creating. We see a white background with dots in the same position as the pictures had holes. Your guess is as good as mine. (a word of warning there are a couple of sexually graphic shots in the film)

Occidental Hotel
Slightly overlong but cool kind of animated film that has comic strip people interacting across a series of photographs. It all becomes a kind of surreal soap opera with the cut out people creating a weird sense of space. As I said it's cool.

Detour Deforce
Footage of Ted Serios a man who claimed to be able to put thought pictures on film. Without getting into the Serios story, this is wildly too long at 29 minutes. Why is this so long? Its just Ted making pictures or not.

O Persecuted
Footage of an archival film on Israel is projected on a wall as someone paints the white wall black---except we watch it in reverse before we cut to young Israelis partying in night clubs and pools. Visually interesting to a point  but the industrial score gave me a headache.