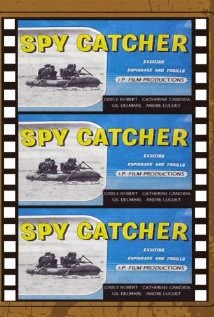 Another film rescued by Sinister Cinema from complete obscurity is a small scale independent (I think) French film about trying to protect some atomic secrets.

The film has a secret agent taking the place of an atomic researcher who has just come upon a new discovery. Replacing the professor on a flight that is brought down by sabotage, the agent moves onto the professors house which is occupied by the professor's unhappy wife, his giddy sister in law and a houseful of new servants.

A very good opening and an exciting ending bookend lots of talk in the professors home as we have to try and figure out who's good and who's bad. The talky bits are interesting but once things heat up in the final half hour with a chase through the Paris night and an extended fight in the Paris Metro you realize how static things had become.

For me this is a really cool little footnote film. Far from both the best and the worst films you'll ever see this is a neat little thriller which has some killer sequences and a great sense of place. The opening sequences set everything up nicely and the final chase and battle in the subway take up to places I have never run a cross in films. This is another one of the small scale gems that Unseen Films was started to highlight. Anyone who wants to see something different and should either purchase this from Sinister Cinema or get it from Amazon streaming service.
Posted by Steve Kopian at September 14, 2014