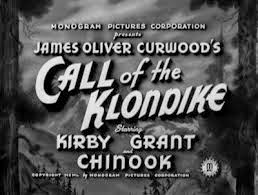 Corporal Webb and Chinook escort a young woman to Healey's Crossing in order to find out what happened to her father who has been missing for three months.  Webb has also been dispatched because weird things have begun to happen in the area and two trappers have gone missing.

Very entertaining entry in the series is, to be perfectly honest unremarkable as these things go plot wise, but at the same time it's warm and fuzzy. It's the reason that program pictures were so popular, you know what you were getting, and when they were put together correctly they were more entertaining than the regular features. This is a film that is a hell of a lot more entertaining than many main features. I would add that this film is also one of the best in the whole series.

While the film isn't big on action, there are only a couple of action set pieces, it is mysterious, you don't readily know who is doing what until a good clip into the film. I like the humor that runs through it with the early sequence of Webb trying to bathe Chinook and the question of Nancy's luggage on the trip a highlight.

Definitely worth seeing, especially if you have picked up the Kirby and Chinook DVDs from Warner Archive
Posted by Steve Kopian at September 09, 2014