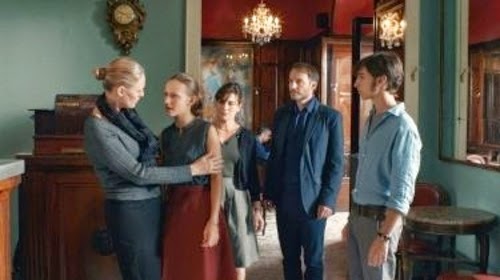 I'm going to be keep this brief and to the point because La Sapienza just didn't work for me. It didn't work for me to such an extent that I seriously considered not even mentioning that I saw it. Then the little voice in my head said to record that you saw it, so I'm writing up this mini piece.

The plot of the film has a couple pondering what their lives have led them to. He's an architect who builds modern buildings, who is wondering what his cold an impersonal style as brought about, especially now since his clients don't want him to change to a more human, more natural style. She's a behaviorist focusing on the lower classes who is equally at a dead end.  The encounter a young brother and sister who cause them to look at their lives.

Filmed in a cold and formal style with intellectual exchanges and everything perfectly planned out I never connected. I couldn't never get past the art of director Eugene Green's perfectly designed set ups. Nor could I take any of the dialog seriously when the characters seemed to be lecturing at us instead of speaking to each other.

Its a perfectly constructed film that is completely devoid of life. Its so perfectly made I was completely lost to it by the twenty minute mark as I stopped caring what was being said and done and instead I simply watched how it was all put together.

Its cold and lifeless and everything that is wrong with so called art films.

If you like overly intellectual films that you can pontificate about for hours to friends who would rather see something more alive by all means see it, but if you want something that's alive with real people see something else.
Posted by Steve Kopian at September 24, 2014