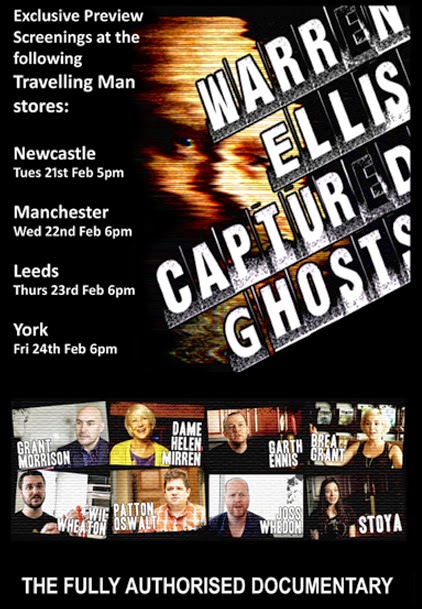 From Patrick Meaney the director of Grant Morrison Talking With Gods comes Warren Ellis: Captured Ghosts a look at the comic legend (and not the Australian musician).

Several interviews with the chain smoking Ellis are intercut with interviews with friends, fans and colleagues as he talks about his life, career and fascination with the future. It’s a film that’s a celebration of the man and his work for fans and perhaps, possibly maybe a way to pique the interest in non-fans.

Several degrees better than the Morrison film which was too scattershot to add up to much, Captured Ghosts is a wonderful 80 minutes with a curmudgeon who seems to know more than we do and who has a wonderful ability to fold phrases for maximum effect. One of the joys of the film, aside to simply listening to Ellis talk is watching his reaction to what the other talking heads say about him. The sequence where he’s called a teddy bear had me roaring with laughter

A film more for fans than the casual viewer Captured Ghosts assumes that you know the work of Ellis to some degree. While this allows for talk to happen relatively free explanation, it also will leave many people scratching their heads. Yes I know Transmetropolian but if I didn’t know it I wouldn’t have any idea what everyone was walking about; likewise Authority, Planetary or some of his more recent work. We get a sentence or two of explanation, maybe, before we get a detailed discussion of things that don’t fully make sense if we haven’t read the work. Its not fatal, but it makes what should have been one of the best films on comics and their creator and makes it only good.

I suspect the problem is with director Meaney who now has mangled portraits of two of comics greatest writers (Morrison and Ellis) by being too close and too in love with his subjects with the result that he made a film for a select few and not for everyone. Documentaries such as this should work for everyone not just the fan, one need only see recent films such as the ones on Jeffrey Catherine Jones or Steve Rude to see what great comics docs can and should be.

Don’t get me wrong, I like the film, hell I could listen to Elllis talk all night, but at the same time this isn’t a film I could show my non-comic fan friends and have them understand why Ellis matters. Yeah, it might make the curious but it won’t be like other better films where they went out and bought books by the subjects of the films.

A must see for fans, all others need not apply
Posted by Steve Kopian at September 19, 2014