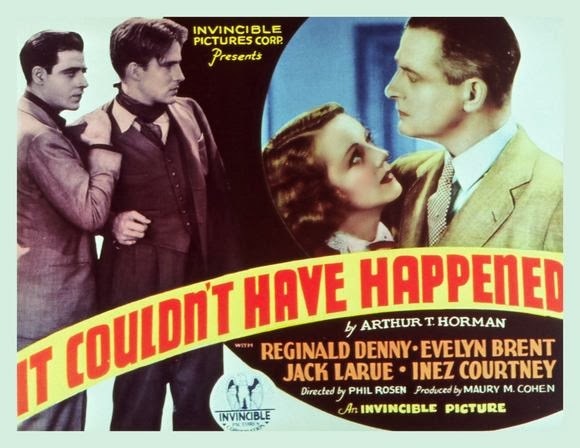 Awful title hides an okay little mystery.I had this film for a while but the title was so awful that I avoided it like the plague. Biting the bullet I gave it a shot this morning before breakfast.

The plot has the two producers of a mystery play killed. Suspicion falls on the cast, crew and a gangster who wants his girl in the play. The secretary for the producers "convinces" the writer of the play to solve it himself.He wants no part in the matter however everyone, other than the police, think it would be a great idea so he's dragged along.

This is a wise cracking little thriller that's actually much better than its title. The always good Reginald Denny plays the sleuthing playwright with just the right mix of "I don't want to do this" and intellectual curiosity. Jack LaRue is a hoot as Smiley Clark, the gangster with a humorous alibi for the murders. He is more than willing to get what ever Denny needs to clear him by whatever means necessary. The rest of the cast, made up of plenty of faces you know is good at providing some nice red herrings.

To be honest I doubt very much you'll guess who done it or how, the solution is much too contrived to be possible anywhere but in a mystery film or novel. That said the film is a neat little popcorn film, perfect for a rainy Sunday afternoon or a late night when you can't sleep.
Posted by Steve Kopian at September 11, 2014