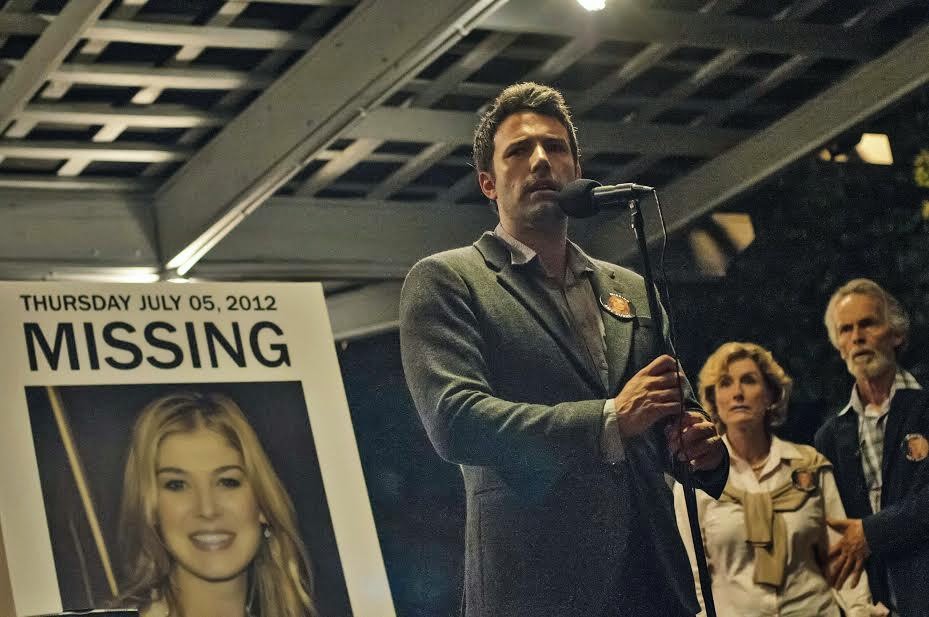 Gone Girl is bendy and twisty in the best of ways, a movie that maintains its hold through the art of surprise. The film starts one way where the conclusion seems foregone. Nick (Ben Affleck) returns home on his wedding anniversary and finds that his wife Amy (Rosamund Pike) is missing. There's evidence of a kidnapping, but it doesn't look quite right. From the beginning David Fincher and screenwriter Gillian Flynn (adapting her own novel) put the onus on Nick. His opening narration suggests a desire to harm Amy, or is it merely a gory metaphor for his inability to read his own wife? His body language, the things he says, the way he's presenting himself to law enforcement and his neighbors suggests some sort of guilt or knowledge. He's withholding something, that's obvious. Whatever he and Amy had was a facade, and as the plot progresses, we learn just what sort of people they were and what they've become.

I found myself parsing every word in Affleck's performance from the outset, reading motives into Nick's every move, even the insignificant ones. And that's precisely what Fincher and Flynn want from this carefully calibrated, performed, and constructed machine whose purpose is to swerve. Just when Gone Girl seems to be going toward a familiar conclusion--think Laci Petersen--it moves in an unexpected and more compelling direction, altering the perception of everything that's come before. And it does this briskly, deftly, and multiple times until the final shot and final lines of the film. Fincher has made a tabloid Hitchcock movie punctuated by pitch black comedy, all the while commenting on the stories we tell ourselves and each other in contemporary American life.

In Gone Girl, the narratives we construct are who we'd like to be, but these ideals are different than who we really are. When these narratives aren't outright lies, they're just facets of a person, and people can become obsessed by the lies and the facets rather than the whole or what's really there. Amy's parents have a famous children's book series that features a character named Amazing Amy, a more perfect version of their daughter. During a flashback to a book launch event, Amy laments to Nick that the fictional version of herself always seemed one step ahead of her in the game of life. (As an aside, when Nick and Amy first meet, they delight in describing other people, writing the sub-standard narratives of those strangers' lives broadly, and simply from outward appearances and mannerisms. It's as if they're using stories to suggest superiority--flirtation through a combination of belittling and oblique self-aggrandizement.) 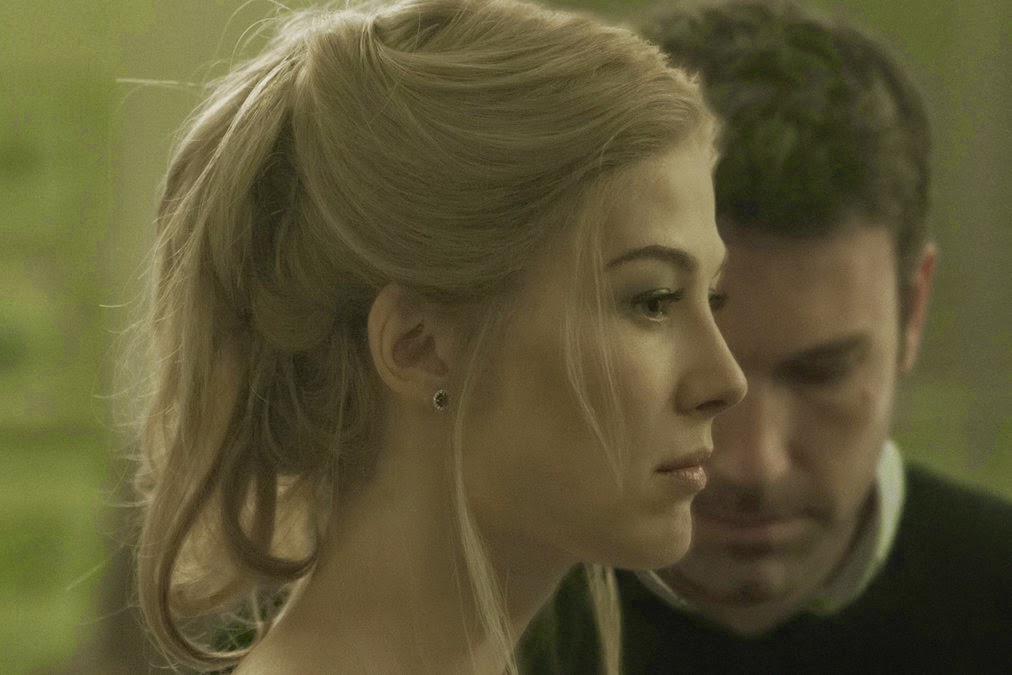 There's also the way we tell stories to others, whether they're written down or expressed through interviews, and inevitably the way that these stories change. Tyler Perry plays high-powered defense attorney Tanner Bolt, a man adept at the optics of innocence. He's as much a lawyer as a PR person, and Perry is so confident as the character. He plays the role not a sleaze like the cliché would go, but instead someone cool, collected, in-control, and seasoned in the game of public perception. Perry winds up being just another unexpected delight in the movie. He coaches his clients carefully, helping them choose words, choose facial expressions, choose wardrobe. Even if you're innocent, the performance of innocence is more important to the public than the fact of innocence. Nick keeps insisting that the truth will be his defense, but it's really the story he tells and the way it's told.

One of the colorful flourishes at the periphery of Gone Girl's mystery is Ellen Abbott played by Missi Pyle. She's a Nancy Grace analog, expressing her highly rehearsed brand of outrage and disgust through sneering, insincere emotional appeals. She's something of a ringmaster in the massive media circus that surrounds Amy's disappearance, siccing her viewers on Nick with every bad PR move or stumbling line. Gone Girl's machinery would not be capable without these kinds of media figures in the real world, because they are integral shapers of crime narratives and crime cliches. Thanks to their brand of reportage as outrage, we think we know the whole story--or we rush to assume the whole story--before it's finished. Rather than relay and interpret the facts, they pre-digest the misery and reshape it for the benefit of our lurid fascination--a mama bird feeding her twittering brood.

Atop all this may be the narrative of the American Dream and how impossible it is to sustain this kind of story. Nick and Amy are both victims of the recession, and in a lot of ways it's something their relationship never recovers from. Unable to sustain this narrative of prosperity and sexual adventure, other narratives they've built break down. Nick is no longer the Prince Charming he was when they first met, and Amy is also unable to play along with the dark road their marriage is moving toward. There may be a black hole at Amy's center, which Pike communicates through certain looks she gives other characters. Something in Amy's essence is harmed when the narrative she wants disappears. What then? There was a line in Neil Gaiman's Sandman about the inevitable sadness of stories that seem to have happy endings--that if you keep stories going long enough, they always end in death.

If there's a moral center to the movie, it's not Detective Rhonda Boney played by Kim Dickens, who's a hardcore proceduralist, but rather Nick's sister Margo played by Carrie Coon. She's hapless and clueless about what her brother and her sister-in-law have been up to, and yet she's someone with a deep reserve of empathy. She tells Nick she's with him since they're blood, no matter what. Deep down, I wondered if she would break in some way, like if the public perception of Nick's guilt would affect her ability to support her brother. This concern probably speaks to the power of Coon's performance as well as Flynn's rendering of the character; all of the main players, really, are built and layered.

I'm avoiding spoilers since so much of the pleasure of Gone Girl is how it negotiates its twists and turns. One scene that marks the start of the film's final act made me whisper "Oh my f**k!" as I was watching it happen. With that in mind, though, I wondered about the think pieces that will inevitably be written following the film's release. The familiar narrative of movie think pieces will play out, and we should get a slew of writing about Gone Girl's use of gender tropes, the film's perceptions of gender and gender roles, and, ultimately, whether or not the movie is misogynist. I'd say the movie is not misogynist but instead cynical. Perhaps it's more misanthropic than anything else, but I look forward to the larger conversation about Gone Girl and going back to the think pieces about the book to see what kind of conversation about gender emerged from it.

And there are complications to all of this, of course. If Flynn were a man, the accusations of misogyny would be more rampant and less nuanced, but since Flynn is a woman and her interest is in, among other things, women's psyches, what we're seeing may not be misogyny but maybe a pervasive misanthropy or doubt in the way we package ourselves or, in a roundabout way, an examination of the effects of the patriarchy and existing narratives of gender expectation on women's psyches. Pike during the post-screening Q & A mentioned that Amy and what her character only works if she is a woman, that gender swapping the character would not work. This is true since so much of the Nick and Amy story is about the narrative of these kinds of cases and the roles that men and women play (or are expected to play) in these stories of marital crime.

But that's a conversation that needs to take place later and elsewhere, and only after you watch Gone Girl and judge for yourself.
Posted by Hubert at September 29, 2014