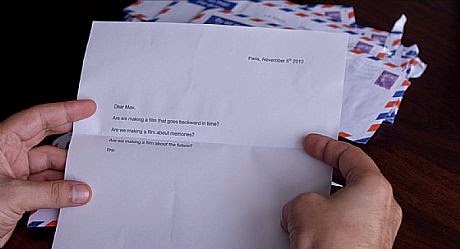 Max who lived in the shadowy country of Abkahazia (it was carved out of Soviet Georgia and is barely recognized by anyone) gets a series of letters from Eric. The letters which run from the brief "are you there" to more detailed missives are used as a springboard for an examination of life, Abkahazia and the nature of the world.

Intriguing film that fits into the genre of landscape films, which are namely narration matched up with images of people and landscapes to create something more. For me it's a genre that either works or fails to the point of boredom. Things like the Patrick Keiller Robinson films, or some of the early Peter Greenaway films are masterpieces that transcend the medium to become something profound. Others, whose names I've mercifully forgotten, are so boring you want to give up on the genre, if not film forever.

Letters to Max is somewhere in the middle. While never quite transcendent, the film is also never boring managing, for the most part to hold our attention for most of it's running time. I say most of the running time simply because the film runs out of steam somewhere during the last half hour or forty minutes.  As interesting as some of the pondering is, I simply got to a point where I was kind of done and wanted to move on to something else, at least for a while.

The film is never bad, it's simply a bit too long, with the result that I would kind of be hesitant to recommend this to someone coming on this type of film for the first time. On the other hand, as I said its not bad, just too much of one thing.

Definitely worth a shot.
Posted by Steve Kopian at September 30, 2014