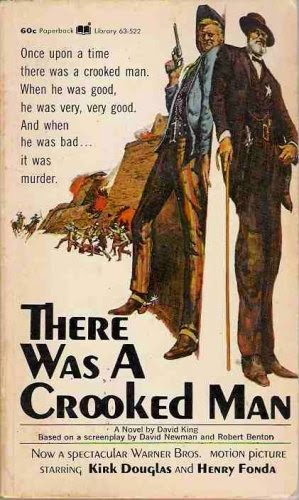 Made at a time of great cynicism and when both Kirk Douglas and especially Henry Fonda were trying to get out of the boxes that Hollywood put them in, There Was A Crooked Man is a darkly comic western with a bittersweet taste to it.

The film has conniving robber Kirk Douglas stealing and hiding away a half million dollars. He’s pretty sure he’ll be able to keep the money, even after he’s arrested by upright lawman Henry Fonda since people will do anything for money. Thrown into prison Douglas plots his escape only to run into trouble when Fonda ends up the new warden.

Filled with great characters, and great performances Crooked Man is a very good movie, but to be honest I never need see it again. A very cynical film it’s almost too dark for me. Ultimately there are no good guys, everyone is corrupt and anything can be bought. Worse there is no honor amongst anyone. It’s the sort of thing that is so bleak that I don’t know why I’m watching it. Life sucks and people are terrible, what’s your point?

While the film is very much a product of its time. the late 1960’s in the days after the Summer of Love melted down into Tet, assassination and disillusion before Nixon’s nonsense pushed everyone over the edge, it frequently comes off as too much. Don’t get me wrong it’s a great film, just who needs to be in that dark place?
Posted by Steve Kopian at September 28, 2014