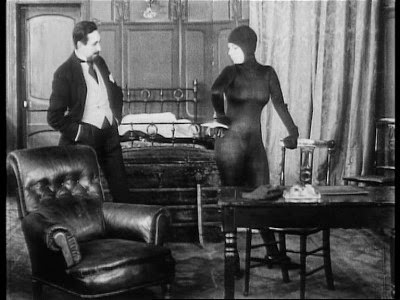 Louis Feuillade‘s 1915 10 part serial is exhausting. It’s also one of the great silent films of all time, if not for what it is , then for what it spawned- thrillers, serials and super villains.

Someone at IMDB in writing on the film said that there is no real way to sum up the plot of the film, and they are right. This long rambling tale is so complex and twisting and crazy that it’s hard to explain, even after you’ve seen it. The simplest way to explain it is to say that a crusading reporter takes on a criminal gang known as The Vampires. They are headed by the mysterious Irma Vep who is dressed in a black body stocking (thus giving birth to the spandex superhero/villain). The Vampires will stop at nothing to get what they want as the trail of bodies scattered across the episodes attest.

Okay let me say something up front, something no one has ever mentioned and I only discovered while watching the serial late one night-namely that Musidora, who plays Vep, is wearing absolutely nothing under her body stocking. Yea, I know it’s a body stocking it would be clear if she were wearing undies, but the damn thing is so sheer that she’s effectively naked. Why is the character so popular? Yes because she’s a cool villain, but also she’s pretty much buck naked. Say what you will about my “discovery” of this, I just find it odd no one has ever mentioned it.

As for the serial itself, it’s a great deal of fun. Playing like more like a pulp mystery novel the film has more thrills and chills than most modern thrillers. Sure the pacing can be a bit slow to modern eyes, but the film more than makes up for it with some really cool twists and turns. The Vampires and Vep really are frightening in their misdeeds (say gassing everyone at a fancy dress party)

I had a blast watching it and by the time the first episode had ended I was hooked and willing to go along with it where ever it took me. So what if it was obviously a stunt double for some of Vep’s tricks (You can’t have a tall thin guy double for a small curvy woman and not have anyone notice) I still was carried along.

A must see- More so if you love film and you love the thought of binge watching something – The restored version from Kino runs almost seven hours and is highly addictive.