Nick Cave in 20,000 DAYS ON EARTH starts tomorrow at the Film Forum in NYC


Opening tomorrow is 20,000 Days on Earth a melding of fiction, documentary and concert film focusing on singer Nick Cave. The film is being released in connection with a tour by Cave which will have Cave appearing at screenings and performing. This Saturday there will be a special screening at New York’s Town Hall which will conclude with a Q&A following the film. The Q&A is going to be streamed around the world. (Details can be found here) 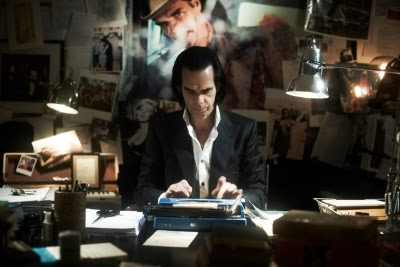 I may be one of the few Nick Cave fans who doesn't particularly enjoy 20,000 Days on Earth. On its surface, I should enjoy this film by directors Iain Forsyth and Jane Pollard since it's beautifully lensed and combines a number of elements I like: it's about music, it's about myth-making, it's about creative impulses, it's about its own construction, it's about the persona/person split, it's about songwriting and prose writing, it's about Nick Cave. And yet watching it, I felt alternating moments of hot and cold, getting hooked by some scenes while feeling distanced by others; in other words, I don't like the album 20,000 Days on Earth, but boy does it have some great tracks on it.

The film blends fiction and reality as it chronicles the 20,000th day in the life of Nick Cave, the legendary frontman of Nick Cave and the Bad Seeds and the earlier spastic post-punk outfit The Birthday Party. (It's multiple days on earth, not just in-real-life given the time required for production, but even in the-reality-of-the-film since Forsyth and Pollard use concert footage, studio footage, and rehearsal footage as flashbacks.) Nick Cave is both character and caricature; this is a profile about Nick Cave and the idea of Nick Cave. As David Foster Wallace wrote about John McCain in the piece “Up, Simba” (aka the book McCain's Promise), “profile” is a pretty good word for this: “one side, exterior, split and diffracted by so many lenses there's way more than one man to see.” There's the idea of the rock star life and also the guy in the studio who has to record the music, there's the serious writer at his typewriter and the pizza-lovin' family man with his pizza-lovin' kids, there's the thoughtful artist engaged in essential solitude and the demigod who pulls all attention to his being on the stage; and there's the interior life of Nick Cave (both person and persona) expressed in voiceover, covering his thoughts on the writing process, counterpoints in songcraft and lyrics, and the creation of fictional worlds and fictional people to populate them. The second shot in the entire film seems to encapsulate this notion of the multi-faceted individual: it's a recreation of a shot from The Man Who Fell to Earth in which David Bowie (on the note of the person/persona split) looks at himself in various bathroom mirrors.

When a song hits you, it hits you in ways that sometimes go beyond language, which is what happened at times with 20,000 Days on Earth. Seeing Nick Cave on stage commanding a crowd is great, with his little pomp and little strut, the badass persona in full effect. The same goes for a performance of “Higgs Boson Blues” with the rest of the Bad Seeds, in which something that feels organic and intuitive unfolds on screen as Cave prompts sudden surges in volume and intensity from his fellow musicians. Even chunks of Cave's narration early on when he's talking about his creative process hold an intriguing power to them, like when he's punching away at his typewriter and describing his method of storytelling, which serves as a kind of meta-commentary on the way the film presents its material.

The coldest parts of 20,000 Days on Earth are the ones that feel the most calculated. On his 20,000th day, Nick Cave drives to his therapist, who's actually a music journalist rather than a therapist. What Cave talks about is fascinating (an enduring early sexual memory, his dad), yet the presentation is less like therapy and more like an interview. Add to that the adoring smile on therapist's face, as if he's less a helper and more of a fan or hanger-on, and that whole section of the film feels like unintentional hagiography. The same goes for a trip to the fictional Nick Cave Archive, which is like a library special collection for the oddments of his career. It's a funny idea for a bit, but then it becomes hagiographic in a way I found grating, self-satisfied, and even self-absorbed (i.e., the Malkovich-in-his-own-head moment from Being John Malkovich). I'm pretty sure it was meant to be more amusing and playful. And then Nick Cave's voiceover becomes overbearing, stating the obvious or pretentious or overwrought rather than the profound; worse, it often states too much when the film says far more and says it much better without the text. This is particularly true of a sequence that closes the film. The experience of the music and the imagery is far more meaningful than the closing words (or any closing words).

I think my aversion to part of the film has a lot to do with what feels intuitive vs. what feels calculated. In her review of Carlos Saura's The Garden of Delights, Pauline Kael noted a distinction between “instinctive Surrealists” and “academic Surrealists.” Instinctive Surrealists present images from “the hidden and unadmitted” whereas academic Surrealists present images that are “impeccably planned to be 'surreal.'” Kael adds: “When [Saura] brings a pig into a house, it's not something dirty being released from the unconscious, it's an emblem and an homage. We are not shocked by Saura's academic surrealism, we 'appreciate' it.” In 20,000 Days on Earth, there seems to be an intuitive hybridity and an academic hybridity. I'm on fire for the intuitive hybridity (i.e., the scenes that are artificial but feel real) and icy about the academic hybridity (i.e., the scenes that are calculated and feel calculated through and through).

There are two sequences that exemplify this intuitive/academic split, and they're both about the same topic: Nina Simone's stage persona/stage presence. On the academic side, Nick Cave tells his fawning therapist about Nina Simone on stage. What he says is interesting, but how it's presented made me less intrigued. On the intuitive side, Nick Cave is having lunch with bandmate Warren Ellis, and Ellis describes exactly what Cave talked about. This scene with Ellis comes after the scene with the therapist, but even knowing the story, it feels more alive here, more organic, more like an intuitive bit of hybridity that reveals some essential and as-yet unseen facet of Nick Cave via Warren Ellis via a story about Nina Simone. Ellis then goes on to talk about Jerry Lee Lewis taking the stage, and the enthusiasm by both Ellis and Cave are barely contained. We watch them not like a studio audience, not like obvious cinematic voyeurs, but like flies on the wall or people who happened to pass by the kitchen and hung around the doorway because what we heard was fascinating. This is all such a jarring counterpoint to the staid and prim nature of the therapy scene.

I can appreciate what was attempted in those scenes of carefully planned artifice, and yet appreciation is not necessarily the same as enjoyment. It's me comprehending the thought process behind a conscious decision. But in lots of art, especially music and writing and film, it's the intuitive, spontaneous moments that grab me most--and which 20,000 Days on Earth does have--because they exist outside of being merely comprehended.
Email Post
Labels: documentary hubert music repost