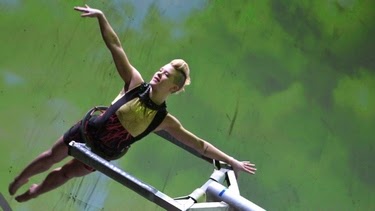 You’ll have to forgive me because I really didn’t take many notes regarding Born to Fly mostly I kept staring at the screen and saying OH COOL over and over again. I think those two words kind of sum it all up.

This is a WAY COOL look at Elizabeth Streb and her company of dancers.

The film is a kind of biography of Streb and a look at her company mixed with a history of dance. Along the way we get assorted discussion of why people create, the philosophy of life and other interesting things. This is a film that I really want to visit again when I can curl up with it on a couch and really enjoy it. 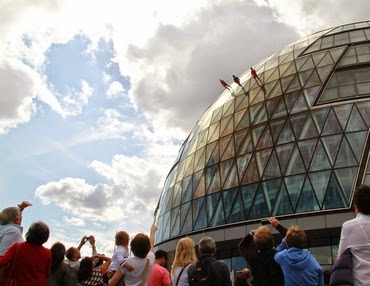 I’m not a dance fan. If you took me to a dance performance odds are I’d be bored to tears rather quickly. However when I see dance on film wonderfully shot I perk up. While technically dance Streb’s action insanity is really something else entirely. A wild cross between dance, acrobatics and circus her pieces are the sort of things that boggle the mind as you wonder why no one has died doing any of them- I mean dancing around swinging cinderblocks or I beams? Hanging from bridges? Getting thrown from spinning wheels?

Its wild its crazy it wickedly cool.

That should be reason enough to see the film, but if not, if you need a reasoned excuse know that it’s a wonderful look at an artist who is continuously exploring the relationship between man, space and the seeming imposible 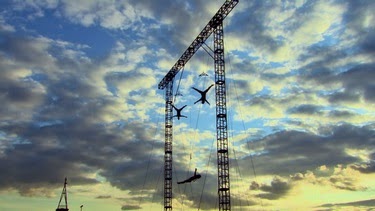