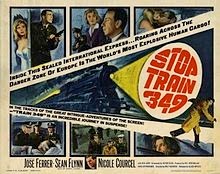 True story of what happened when a sealed train traveling from Berlin through a divided Germany was stopped by East German authorities after it was discovered that an East German national had managed to get on board at an unscheduled stop (the train had wait for another to pass in front of it). It created a standoff that caught the world's attention.

Taut film largely gets everything right in its depiction of the East West tension of the Iron Curtain. The stark documentary like black and white photography puts you on the train. Not only are we on the train but we are  caught up in the action in away that few films manage to accomplish. It maybe 50 plus years since the events happens and 20 plus since the Cold War ended but we still feel the danger. By all accounts this largely forgotten film is one of the best at showing the real deal with the conflict between the Cold War sides to the extent that it was supposedly used by the military for training purposes.

While the the film does have some problems with the script, some of the dialog isn't quite sharp early on, the film hits its stride once the stand off begins and the fate of the passengers is put into question.

The cast is quite good with Sean Flynn, Errol's son, quite good as the American officer at the center of it all. If he seems at all awkward its because he's playing a young officer who is ultimately in way over his head. Equally good is Jose Ferrar as a crusty old journalist, first annoyed at having to take a train, and then happy at being in on the story of the century and then acting as a kind of sounding board for the various parties.

A sterling film of the sort that Unseen Films was started to highlight, this is a must see for anyone who loves good films. Why this little stunner isn't better known eludes me. I suspect that it's low budget origin and release by a small company kept it out of TV rotation for years. Until I ran across it in the Sinister Cinema catalog I had never heard of it- which is a shame since not only does it highlight an forgotten event in the Cold War it's also a damn fine thriller.

Available from Sinister Cinema and Amazon and Amazon Streaming.
Posted by Steve Kopian at September 13, 2014