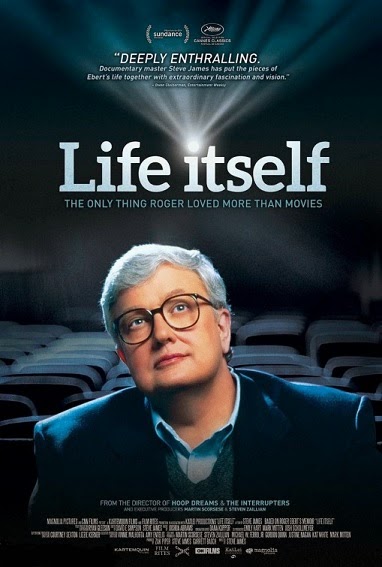 Life Itself is a nice movie but not that nice.

This look look at critic and writer Roger Ebert from birth to death is eulogy for the man and his life. Its a very good film but let's be honest here the film is pure unadulterated hagiography the result of Ebert, his wife and friends all being involved in a film that came to completion in the weeks and months following his death. It's a nice movie who's emotion comes not from quality but from the loss of a friend and family member. Its a eulogy not a documentary. There is nothing wrong with that but I wonder what people will say when they have some distance from the man and his passing.

To put it another way the film is not the best of the year and it should not be considered for an Oscar (I'm talking actually winning the award, I'll be okay if it gets an nomination). Any declaration as "best" or award given to it is the result of pure emotion about a film that shows us one last time the life of someone we considered a friend and not from reasoned or critical thought.

Understand I don't hate the film. I think it's quite good but the film is wildly too long and doesn't really say a hell of a lot except that Ebert was a nice guy....

...which is a weird thing because after watching the film for two hours that's all I can say.

"Gee,he had a tough time in the end."

I really can't say much more than that. I mean the film hits all the highlights of his life, his home made newspaper, his time in college, his job at the Sun Times, championing the under dog, his drinking, Gene Siskel, Chazz... Its all here laid out  like a memory board of photos at a wake. Its a fine remembrance of the man...but it doesn't say much beyond that. Yes it made me feel nostalgic and empathetic for Ebert and his trials, but it didn't reveal anything I didn't know before.

Usually when I see a documentary I always ask "Why are you telling me this?" Additionally "What is the reason that you are asking me to take two hours to learn about this subject?" With Life Itself I really don't know. Frankly I think even Ebert, who says he went to the movies to learn about life, would be forced to wonder what's the point beyond one last raising of a glass to a friend who's past. I have no problems with films that are arcs of a life, but usually the best ones try to be more than "nice".

I'm sorry if my lack of love upsets some of you but seeing this film after several films that are going to play at this year's New York Film Festival (in particular Silvered Water,Syria Self Portrait and Non-Fiction Diary) I'm forced to ponder why fluff like this is going to win all of the awards while the soul shattering thoughtful films like those at NYFF will, in all honesty, be ignored. (And do track down  Silvered and Non-Fiction they will rock your world)

Sadly Life Itself will end up as a documentary equivalent of a Hollywood Blockbuster crushing out smaller more deserving films. I would like to hope that once Ebert,wherever he is, would be a little saddened by that, since he once championed smaller films.

On the other hand I'd like to think that there are some of us following in his footsteps who are still looking for the hidden gems and not getting completely blinded by the flash of Hollywood's glitter.

By all means see the film, but realize it's not the be all and end all,
Posted by Steve Kopian at September 04, 2014