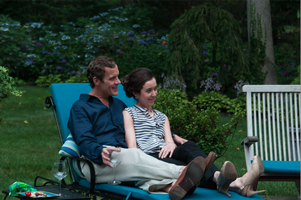 Stop that. No stop that- I know what you're thinking, this is cutesy and twee and not worth your time. I'm here to tell you that the film is actually pretty good and worth checking out.

The reason that the film works is that the film is based on co-director and writer Alan Hruska's play of the same name. The dialog is smart. The characters are compelling and much more intelligent than your typical romcom inhabitants. More importantly because the film mimics the play with long scenes of character interaction things play out more realistically. Characters really talk to each other and get beyond witty reparte, we get to know the people more than we do in most romances. Its a bold move that pays off with a real connection to the characters and events.

To be honest I wasn't sure if I wanted to see this film. I didn't know if I either had the time or any real desire but I got talked into it by someone connected to the project who suggested that there was something special to the film. There is. There is a wonderful charm and life to the film that most modern romances miss. It's a film that really does have characters who are a tad more than caricature.

Is the film perfect?

Honestly it's not. While the film is better than most recent romantic comedies the the film still operates inside the romantic comedy genre parameters for both better and worse. There is a sense of whimsy that occasionally can be a bit too much. Also the women playing Nellie and her sister look too dissimilar to really be considered sisters. Both are small little flaws that in no way affect the film and the way it plays your heart strings.

For me this is a small gem. This is exactly the sort of small film that Unseen was started to find, gems that most people won't take a look at because they think they know what they are getting. No they don't. This is a small romantic comedy that is worth your time and effort to see. It may not make your best of the year list but it will make you smile and feel good.

The film opens Friday in New York at the AMC 25 and the Chelsea Bow Tie
Posted by Steve Kopian at September 09, 2014