ARCHAEOLOGY OF A WOMAN Digs Fertile But Uneven Ground 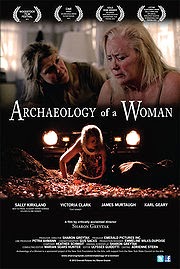 ARCHAEOLOGY OF A WOMAN, from director Sharon Greytak concerns an elderly woman named Margaret (Sally Kirkland) whose mind is set upon by severe dementia. Normally this would be a harrowing enough premise. However, Margaret also has a past marked by unclear but ominous undertakings. Our introduction to Margaret shows her hobbling restlessly about a supermarket parking lot. She beseeches a police officer for help finding her car with seeming sincerity, yet her interaction with him feels offputtingly like an attempt at seduction.  After a fruitless search for her vehicle, she is driven to her home where her automobile awaits. Margaret’s reaction is inscrutable. Is she legitimately confused or was this some kind of carefully constructed ploy? And if so, to what end did it serve?

Perhaps intentionally, the parking lot incident leads to Margaret's somewhat estranged daughter, Kate, showing up to help. Here another plot and theme is explored, as Kate, a successful chef brokering a deal to become a big time restaurateur, is faced with a choice of looking after her mother or remaining focused on her career path.  Hints suggest that the relationship between mother and daughter has been a more than a little rocky path, making her commitment to being by her mother’s side a difficult decision to come to terms with. Margaret's abrasive demeanor suggests this all the more.

Throughout ARCHAEOLOGY, Margaret appears torn between her deteriorating mental state and a conniving countenance, which seems to be have been adapted as a form of second nature survival instinct. Which force is in control is constantly in question: Is Margaret's lapses into bewilderment feeding a compulsive drive to manipulate those around her, or are her mental slips a tool that serves her self preservation, guarding against the uncovering of a nasty truth?

Kirkland's performance keeps us captivated by the questions…for a while. She holds nothing back, writhing beneath her character’s skin in an unsettling performance. Although she is able to capture the essence of Margaret's anguished restlessness, the character lacks development. This is due in large part to an unravelling story that undermines its bigger ideas. Instead of becoming elucidated, the events of the past that are at first chips away only become murkier and more difficult to discern. A case could be made that this matches Margaret‘s increasingly distorted perception of reality. However, it shouldn’t come at the cost of frustrating viewing. While maintaining an aura of mystery is often sufficient to drive a story’s message home, here it comes across as dissatisfying. After the time invested in the unevenly navigated story, an explanation feels deserved, hard earned even.

This brings up the tone. At times, especially as details begin spiraling into obscurity, a more stylized shading is called for. Perhaps a lurid or psychedelic coloring, something suggestive of the tale’s more outlandish turns. While the soundtrack moves in this direction, creeping in with repetitive nerve-wracking echoes of horror, the visuals almost always play very close to real. Recognizable settings like Grand Central Station, or the interior of a nursing home, feel pedestrian. It’s hard to bridge this with the decidedly fantastical elements added into the narrative. Likewise, it is a bold yet in the end disjointed attempt to join a sober account of mental illness with a more mischievous head trip.

Still there are interesting themes touched upon that are worth considering, even if underdeveloped as the result of a flawed telling. Shades of  Margaret‘s past indiscretions and Kate’s increasingly risky behavior suggests that mothers and daughters may share deep rooted bonds, traits and habits being passed on and superseding common sense or a desire to break away from unhealthy influences. The film is at its best when providing a simple, unflinching look at dementia’s debilitating effects.