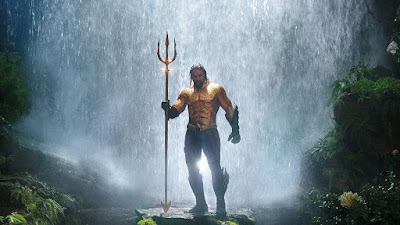 Do we need another review of Aquaman? Will anything I say make any difference to anyone?

Right now the film is on track to make a bagillion dollars and restart the DCU. Actually its more redirect since the films are making money even as they are getting beaten up by the critics and fans.

For those who want to know before they see it the film follows Arthur aka Aquaman, as he is drawn into saving the world from his brother who is the current king of Atlantis. In the process he battles Black Manta and some other people and reunites his parents (oops sorry that’s a spoiler--- which a blind man could have seen twenty miles off)

A wonderful animated film with some live action sequences (come on that’s what these tent pole films are now) the film entertains with its endless motion and some pretty okay characters who would be pretty great characters if they had more to do. Honestly how much of the climactic battle really involved people? Very little because it it’s all huge armies and monsters and ray guns none of which are real.

I particularly liked the score which repurposes some truly great songs for optimum effect. I mean the film uses Sigur Ros, Depeche Mode, Roy Orbison and Pitbull to great effect. I found myself barking out "cool" because of the music several times.

Yes I’m being snarky. I’m sorry but I’m somehow amused that one of the least complex superhero films and the most visually bloated (come on this film exists purely to delight the eye) is being hailed as one of the best. Of course the film doesn’t screw up the plot or characters- it doesn’t have enough going on to screw anything up.

Don’t get me wrong, I like the film. I like the characters a great deal (though I would have liked more from Black Manta. I mean the fact that all we know about him is the hate does not make him a fully formed character. Frankly his dad is more a round character and he dies early on). It’s a wonderful spectacle but outside of the visuals it never surprises. It takes no chances and follows every expected path to the end (except in not killing off any major character)

Is it worth seeing? Yes. Its probably even worth seeing in 3D if you can see it in a theater with a bright enough bulb. But regardless I bet you were going to see it anyway and my snarky words made no difference.
Posted by Steve Kopian at December 21, 2018