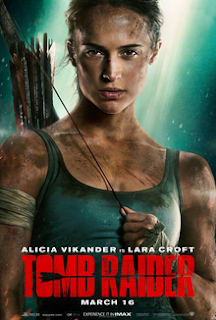 Restart of the Tomb Raider franchise is also an origin story that shows us where Lara Croft came from. ts a grand mess of a film.

Lara Croft refuses to believe her father is dead and as such will not sign the papers to inherit his fortune. She is living on her own, acting as a fighter and a bicycle messenger. When a chase lands her in jail, she is bailed out and decides to sign the papers at last. However before she can she discovers a possible clue and goes to find her dad. Ending up shipwrecked she ends up having to battle minions of an evil group hellbent on controlling all supernatural artifacts.

Stupid as a stick Hollywood production has little internal sense and less logic.  Very little in this film makes sense. The entire island sequence that makes up the second half of the film had me wanting to ask question after question. If nothing else start with all the questions about the villains being stuck there for years and work your way out to everything else and you'll have a film laying in pieces around your feet. Most of the action sequences, while good looking are too much like something you'd see in a video game.

Oscar winner Alicia Vikander takes on the role of Lara Croft. Vikander is fine as Croft and she makes a fine action hero.  She almost single handedly makes the film work. I completely understand why she took the role. (Though what Kristin Scott Thomas and Derek Jacobi are doing here other than collecting a pay check is beyond me)

Frankly while I was entertained I really wonder if I will bother with any sequel because this one is just so damn messy.