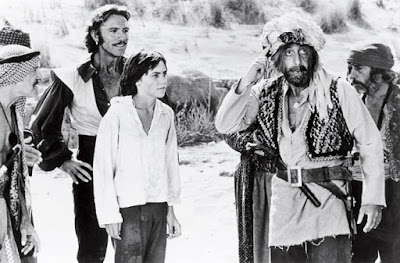 The making of this film was documented by director Peter Medak in THE GHOST OF PETER SELLERS. In the doc Medak documents how star Sellers went about seeking to destroy the project because after getting the film set in motion he decided he didn't want to do it any more. The result is a legendary bad film that wrecked Medak's career. After seeing the documentary I searched out the "finished" feature to see if it was as bad as the documentary makes it out to be.

Based on a novel and filtered through the brain of Spike Milligan, GHOST tells the story of Dick Scratcher (Sellers) a cook on a pirate ship who kills the Captain after he buries the treasure and becomes captain because he has the map to the treasure. The trouble is the captain's ghost wipes the map clean and the pirates end up wandering for years trying to find it again. They are eventually helped by a boy who can see ghosts.

Messy beyond belief, the film was never completely shot because of Sellers' games, GHOST IN THE NOONDAY SUN isn't bad so much as incredibly dull. Basically everyone runs in circles for 90 minutes as things happen. Decidedly very Milligan -esque it helps if you are a fan of the legendary Goon Show or Milligan's own brand of bent humor. It is an acquired taste and even by his standards this film is a bit loopy. (Milligan who wrote the film was brought to the location to help rewrite the script but he simply wrote himself into the film, directed a few scenes and made it even more surreal and nonsensical.) Because sections were not shot there are narrative jumps, some of which are covered by title cards and some are just left hanging.

Not really bad, it's not really good either. The pacing is off, I'm guessing the result of problems in shooting and director Medak being limited in his editing choices. The humor is incredibly broad and often still manages to miss the target. yes it has some laughs but mostly we watch as people are silly.

While all of the cast other than Sellers comes off pretty good (Anthony Franciosa is incredibly good), its clear Sellers wasn't happy. He is mugging terribly and what could have worked in a five minute sketch crashes and burns in a 90 minute film.

Watching the film I kept waiting for something good or bad to happen. Nothing really did. Its clear there is, or was, or could have been something here but that  Peter Sellers happened and wrecked it...

...actually that's not fair, I think that on some level I think the film was kind of doomed from the script stage. Milligan, as funny and insane as he was also simply never had a tight enough grasp on reality to make a straight narrative work. Comedy or no he was the wrong person to write it.

In the end GHOST IN THE NOONDAY SUN is not much of anything. A grand footnote in the careers of most of the cast, it derailed Peter Medak's career for a while simply because he took the blame for the failure and was skittish about doing another big film. Is it worth seeing? If you are a fan of the stars and want to see everything they have done it is. Mostly though it's of interest linked to Medak's excellent documentary about the making of the film and as a warning of what happens when egos go unchecked.
Posted by Steve Kopian at December 15, 2018

Email ThisBlogThis!Share to TwitterShare to FacebookShare to Pinterest
Labels: comedy, England, not worth the effort