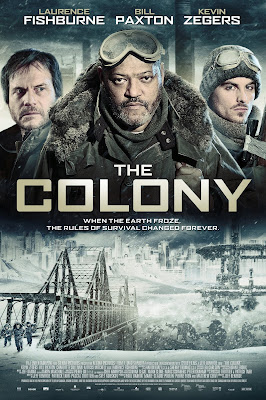 In a frozen future what is left of mankind has disappeared into deeply buried colonies. However things have been cold for too long. Things are breaking down. Food is running out. Disease when it occurs runs rampant. Things are so bad that if you don’t have a quick turn around with a cold or flu while in isolation you are either executed or sent off to wander the wasteland and take your chances. When an SOS is received from a sister colony a small group is sent to see if they can help. What they find is a blood bath. A group of cannibals have over run it prompting a fight for survival and a flight home in the hope of warning their colony.

Solid scifi adventure/horror film sucks us in and moves along at a good enough clip that we really don’t notice some of the bumps in logic to the plotting. Its buoyed by a great cast that includes Laurence Fishburne and Bill Paxton in key supporting roles. They add a weight that helps put the whole story over.

I really liked this film a great deal. I remember when the film was originaly released wanting to see it, but missing it theaters. I was disappointed by the less than sterling reviews, but now having seen the film I’m kind of left to ponder why the film wasn’t better received not why the film has kind of fallen off the table since it is entertaining and a great gem to curl up with on the couch.