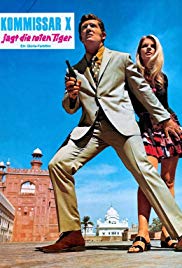 The final film in the Kommisar X series is also the hardest to find. I know because in deciding to review the entire series it was the one that gave me the hardest time running down. I could get an expensive copy on EBay but I really didn’t want to do that. I could find copies in German but that would prevent my doing a review. I finally stumbled on an awful print on You Tube and after fifteen minutes I realized why the film is so hard to find, it’s so bad no one wants to release it.

The plot of the film has Walker and Rowland getting involved in smashing a secret brotherhood which is running opium out of Afghanistan into Iran, Iraq and eventually Pakistan where it is then sent to the US. Little happens, and none of it is exciting.

A Pakistani co-production the film doesn’t feel like any of the other films in the series. It was one of the first international co-productions with the Pakistani film industry, made to help spark further co-productions. While further films happened it wasn’t because of this film, which frequently forgets the nominal main characters (are they even in this?) in order to highlight Pakistani location and characters. While it wouldn’t be bad if it moved things along, that isn’t the case and things just seem to run on and on to get things to feature length.

More comedy than action film (there is almost no real action) the film takes the worst parts of the series and amps them up. It’s all tongue in cheek and jokey with the result none of it is funny or engaging. It’s so bad that I would have shut it off had not committed to reviewing the film.

What were they thinking?

I guess everyone wanted a pay check. And I really mean this is a pay check film or a paid vacation because everyone looks like they are on holiday at a resort making a home movie. No matter how serious things are supposed to be everyone has a smile or a smirk on their faces. Clearly they had a grand time…

… which is something that doesn’t carry over to the audience- this is just a painful viewing experience. It’s so bad you know why this killed the franchise.

This is a sad ignoble end to a super series. Honestly this is the only film in the entire Kommisar X series that isn’t worth the effort

Avoid this film at all costs.
Posted by Steve Kopian at December 30, 2018