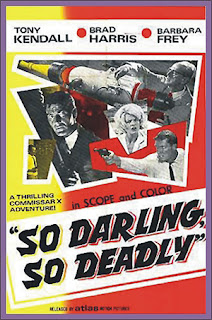 A step back in the series after DEATH IS NIMBLE DEATH IS QUICK, SO DEADLY SO DARLING feels so much like the first film that one wonders if this wasn't shot second and released third.

This time out Joe Walker and Tom Rowland end up is Singapore trying to help a scientist who has created a lens that will intensify a laser beam. The lens is wanted by the Golden Dragon a hooded bad guy with a huge army.

This is an odd film. The relationship between Walker and Rowland is the well written and mirrors the one they have through most of the series, with witty repartee, however the plotting is a complete mess. Walker and Rowland kind of stagger around and fall into fights which lead them in a direction were another fight happens. Nothing really makes any sense, its just European actors wandering around beating up Asian henchmen.

Its hard to believe that this film comes chronologically after DEATH IS NIMBLE... since it feels it feels like the bridge between that and the first film KISS KISS KILL KILL which had a sort of plot and sort of characters. Additionally a bunch of the actors from the first film carry over here in similar roles.

High art this is not- pure popcorn chomping entertaiment it is.