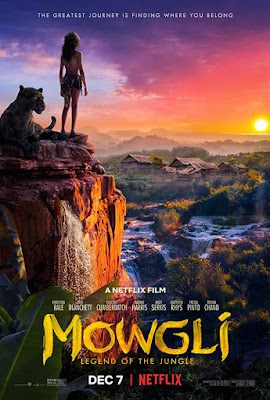 Andy Serkis’s Mowgli has had a rough trip to the big screen. A big screen motion capture adaption of the Jungle Book is had many people scratching their heads since it went into production so close to Disney’s version. Once Warner Brother’s shelved the film more eye brows were raised. And then the film was picked up by Netflix for release this Friday which gave some people hope.

What shocked me was that quite unexpectedly and unheralded, Netflix dropped the film into a couple of theaters. In New York, where it is playing in one theater (The I-Pic at South Street Seaport) the film is playing in 3D. Apparently the theater didn’t know they were being sent a 3D print so weren’t charging for a 3D film.

Monday, with five hours to kill between Award screenings I shot down to I-Pic and saw Mowgli on the big screen….

First and foremost this is not the Disney films. It is not the Sabu film. This is a version of the story told in the Disney films but it is ultimately, and gloriously its own film. Once I really dropped the connection to Disney I loved the film.

The film tells the story of Mowgli from his being raised by wolves through his battle with the tiger Shere Khan. It has most of the characters you know from the early films but no King Louie. And while it has a lot of elements you know it takes it all in a different direction.

I think the biggest reason that Warner’s walked away from the film is that this really isn’t for little kids. The film is real and raw. The characters are feral with matted hair and flies buzzing about. Characters die. There is blood and fed on carcasses. Yes the animals have the features that approximate the actors playing them, but they are most assuredly animals and this is the jungle. Everything has a cost. This really is life and death - where one death had me tearing up.

Actually a lot of the film had me tearing up. There are a lot of deeply moving sequences in this film that just kicked my ass. The speech that Mowgli’s mom gives him about loving him no matter what damn near broke me; as did Mowgli’s venting his rage at being so different that he will never fit in. That exchange between himself and his best friend, an albino wolf left me fumbling for tissues. You could feel the pain, especially if you were ever on the outside knowing you’ll never be on the inside no matter how you choose to look at life.

And that is what makes Serkis’s film truly great, the real and raw emotion. We feel everything that happens. We feel the danger, we feel the jungle and we relate to the emotion everyone is feeling. Rarely has any big budget film been this in touch with its emotion…and not just in touch, but able to express it so we in the audience not only seen and hear the film but feel it on every level.

It is a stunning achievement.

And some people are not going to get it or understand it. They want Disney. They don’t want the complexity. They want a film that isn’t this one, and that’s okay, there are other versions.

What I think is going to happen is that despite parents being cautious, the kids will stumble upon it and fall in love. I think the kids who like darker things will find it first and then the outsiders and then the rest of kids. Once the  film has time to be discovered and it will be hailed for what it really is - a masterpiece that come critics, the studios and audiences didn’t get right away.