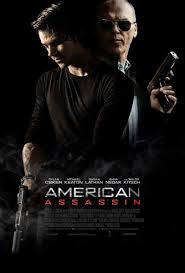 This really good espionage action film is destined to be discovered on cable after disappearing unceremoniously in the theaters. Perhaps it might even result in a another film.

This film is gripping from the first as there are twists aplenty and tons of action. You can't help but get sucked in. Even my dad, who normally plays his computer games while watching movies stopped playing to give it all his full attention.

No it isn't perfect, there is a point about an hour in when it seems that they left something out, but it is nothing major and once  the twists really start coming you really won't care.

Highly recommended for action fans, its currently in rotation on cable.
Posted by Steve Kopian at December 12, 2018