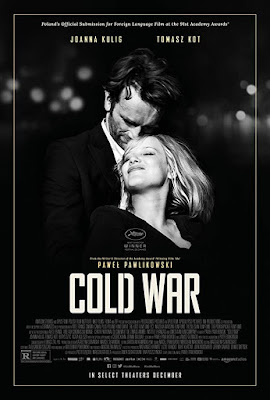 Winner of numerous awards as Best Film and the first film to generate intense positive talk at the New York Film Festival press screenings, COLD WAR is a very good film. It is a film that is going to click with many people and leave other people cold with its distance but regardless it is a film you can’t help but walk out of without feeling you’ve seen something.

An episodic tale of love and longing the film follows as musician sent across Eastern Europe to record ethnic music in the days just after the Second World War. He and his group are going to take the music and create a traveling show with it. One of the performers is a pretty blonde with whom he falls in love. Their on again off again affair lasts the better part of 20 years, crossing the iron curtain several times.

The war of the title is the war of the heart. This is, ultimately a grand love story and if you’re looking for anything other than that you will probably be disappointed. I was half way into the film before it clicked for me when I realized what the film was. Once that happened I really enjoyed it since I stopped looking for something greater.

Driven by a seemingly endless stream of music the never ending songs don’t just punctuate the action but act as a kind of musical Greek Chorus which add information for everything we are seeing. Things may remain unsaid between the characters but the songs they perform do all the talking. Its marvelous.

I like it enough that I wish I hadn’t heard all the talk about how good the film was so I could have discovered it on my own. The word from several of my friends was so impossibly positive it could never have lived up to their promise.

The film hits Theaters Friday and Amazon somewhere along he road.
Posted by Steve Kopian at December 17, 2018