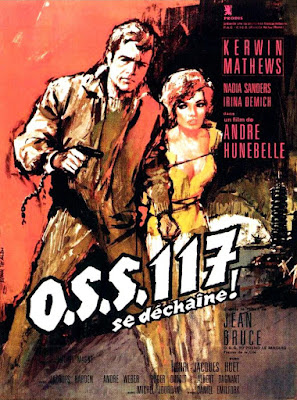 While not the first OSS117 film, that would be OSS 117 IS NOT DEAD (1957), this is the first of the series made in the wake of the James Bond films. Its also a really good film that doesn’t seem like the sort of film that Bond would have spawned.

The plot of the film has OSS agent Hubert Bonisseur de La Bath traveling to Sardinia in order to find out what happened to an agent who died while investigating a series of underwater caves. The area is ripe with baddies and he’s in danger the instant he hits the island.

While the film has some action, the film is more a talky film closer to the more serious less a spectacular films of the period. de La Bath is actually investigating things by asking questions and breaking heads. It’s closer to From Russia With Love as opposed to Goldfinger. It results in a super little film that has weight and suspense.

The film, like the series, is also kind of anti-bond. A sequence late in the film where de La Bath goes underwater to see where the murder occurred is, aside from an okay audio effects track, almost silent. It’s a sequence that builds suspense via the natural tension in the situation and not through sound effects and throbbing music (ala Thunderball.) Director André Hunebelle also allows the film to play out over time which heightens everything.

This is a solid euro spy film. It’s easy to understand how this spawned a series that stretched on for five films and later spawned two satires with Jean Dujardin in the lead. Actually in going through the series recently I’m kind of shocked that they would spoof the films, especially considering it’s less goofy that the Bond films or some other similar series (Kommisar X for example)