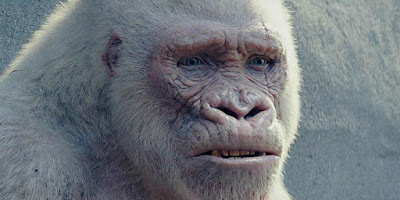 I want to say that Rampage might be the best movie based on a video game, but doing so would imply that it isn’t that good because the video game movies for the most part have really sucked. The truth is Rampage is an incredibly good film filled with action and weepy moments.

The basic plot has an evil pair of industrialists formulating a new drug that turns animals into giant mutants with uncontrolled aggression and increased healing. It’s so dangerous that they are doing experiments in space. When their test subject wrecks the space station and the formula falls to earth it infects some animals on earth including Dwayne Johnson’s buddy, a large white gorilla. As the animals race to Chicago Johnson and his friends have to find a way to stop the destruction and get the animals back to normal.

Wickedly funny, the film knows what it is and goes with it. It doesn’t pretend to be deep and meaningful, it simply sees itself as a glorious thrill ride and as a result the enjoyment is doubled. The best thing about the film is we actually have characters, we have good guys who are rounded and we like, we have bad guys we despise and we have a giant white gorilla who gets our heart. Make no mistake the film works because we fear for the gorilla. It maybe the best wholly CGI character I’ve seen in a film. As the final battle transpires and everyone is broken and bruised I was afraid that the worst was going to happen. People were dying, blood spilled and heads ripped off so it was clear that no one was safe.

And that’s another plus for the film, it has an emotional weight. What happens costs our heroes, blood is spilled, they wear down and wounds are inflicted. It makes you wince because you know they really can get hurt because they do get hurt. Yea, its movie violence but within the world of the film they are hurt and we truly fear. More films should do this and not have heroes that stride through the action undamaged.

Frankly I love this film. It’s a blast and a half. So don’t let the source fool you this is one of the best monsters on the rampage films ever made.
Posted by Steve Kopian at December 22, 2018