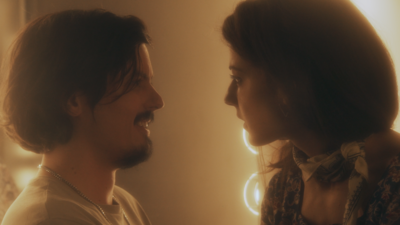 Arty inde dramedy about a theater director putting on a play based on her life and the people in her orbit.

Pretentious faux clever film looks like a low budget inde film from 30 or 40 years ago. Lots of colored lights, arty angles mix with pretentious dialog and a way too knowing sense of the absurd mix to create film that is not clever, not funny and incredibly painful to watch.

Simply put this film is shit.

I didn't believe in anyone or any relationships. Why was the director with her ex? I don't know other than the fact she likes gorilla sex (just don't ask). Why is anyone with anyone ? I have no idea, they are all assholes. I disliked everyone. The film completely lost me with the gonorrhea jokes ( it makes a joke about a guy just diagnosed with gonorrhea bedding his girlfriend before telling her).

Running a scant 70 minutes it is wildly too long. Might I suggest it be cut down to simply the last frame?

Avoid this film like the plague
Posted by Steve Kopian at December 03, 2018