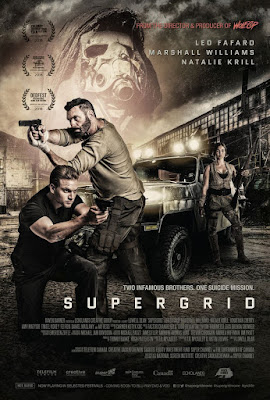 How good is Supergrid? It is a late addition to my end of the year lists. A small budget apocalyptic tale that starts and goes at lightning speed straight to the end. Its full of great characters and even better action. If it’s not perfect it really doesn’t matter since what is important is finely tuned and nicely polished.

Set in a future where a giant mining company has taken over chunk of the US, poisoned the environment, and wrecked society so badly that evil gangs roam the roads (aka The Grid) killing and robbing anyone who cross their path. Driving into the wasteland are two brothers who need to make one more run for a criminal organization in order to get a certain package so they can be free of their obligation. Of course it all goes wrong…

I want to describe Supergrid in terms of other films, but that really isn’t fair. It’s also really damn lazy, since while the film kind of looks like other films here and there, the film as a whole, is wonderfully its own thing. Director Lowell Dean and his crew has done what the best filmmakers have done and taken the best pieces from the films and stories that influenced them and made something that is uniquely their own.

While the film commits the sin of trying to explain way too much of the world early on, once we get out of the city the film just goes. We’re in motion and things don’t have to be explained just witnessed and we are better for it. Deeds replace the words and we are drawn to the edge of our seats as a result. Deals are attempted, road blocks run, our heroes are hunted and helped and plans go sideways as bullets fly. It’s all beautifully done in such a way as to maximize suspense and popcorn munching.

That’s the film works as well as it does is due in large part to the cast. Everyone from top to bottom is clearly invested in their roles. No one is phoning it in and as a result everything carries weight. That may not sound like much, but way too often in genre films actors seem to take it less seriously with the result we stop caring because they have. How good is everyone? As the film was winding down I was thinking that I would like to see another film with the same cast.

I’m torn about whether to really talk about the film and give details or not. I want to tell you about some of favorite bits but at the same time I’d rather just let you experience it.

Actually just see it with a huge bowl of popcorn and beverage of choice and enjoy.

This is a great little action film. I like it so much that it's on one of my end of year lists. 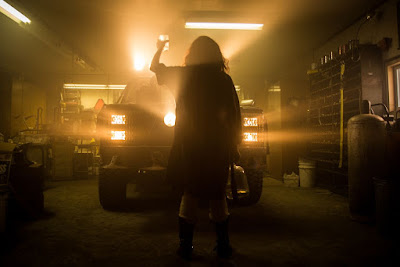