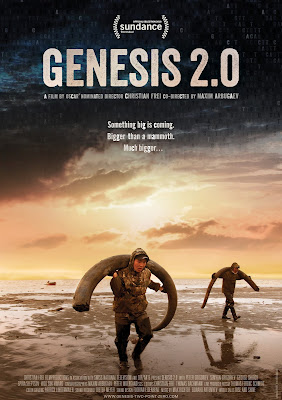 Dual story pondering the future of human existence begins with native Yakuts on the remote New Siberian Islands. They have come to the islands in the hope of finding a mammoth in the permafrost. They all hope to find the large tusks that will fetch tens of thousands of dollars. If they are lottery level lucky they will find a preserved carcass in the ground. This is cross cut with the scientists who are looking to engineer new life forms and to bring back old ones with genetic engineering. Bouncing between the two threads we are forced to ponder what we are doing and where it will lead.

Moody, gorgeous to look at documentary is film of quiet power. This is a film which sucks you in with its images and the mystery of its tale (what exactly are these guys looking for?) and then once it gets us it slowly gives us things to chew on. What are we really trying to do with creating horse/zebra or lion and tiger cross breeds? Why are we really doing it beyond simply that we can?

I’m not sure. To be honest it’s been several days since I saw Genesis 2.0 and I’m still turning it over in my mind. I’m still pondering what it was trying to say and what I think about it. I don’t mean that in a bad way, but in a good way. I love that the film is hanging in my brain and forcing me to think about it. Several days on I still don’t have answers-which is as it should be. Frankly had I not had a deadline I would have waited to write it up- but the film opens Wednesday so there is no time.

Ultimately I really like Genesis 2.0. It is definitely worth a look, more so on the big screen where the images can overwhelm. See it starting January 2nd. For more information go here.